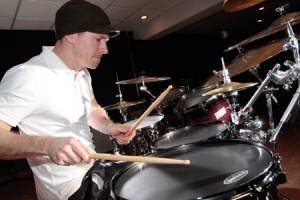 This week it was announced that drummer Chris Pennie has parted ways with the hard-rock band Coheed and Cambria, which he joined in 2007. Pennie, a 2011 Modern Drummer Pro Panelist, played on the group’s 2010 album, Year of the Black Rainbow. He plans to devote his time to, among other endeavors, the band Return to Earth and the music-production company Fight Mannequins. It is being reported that Pennie’s departure from Coheed was a mutual decision based on creative differences.

“Tough decisions were made today that will help shape this band for the coming years,” says the group on its Facebook page. “We extend our deepest appreciation to Chris Pennie for an incredible journey.”

Chris has posted a statement on his own Facebook page: “I am very thankful for the years that I shared the stage with the guys and want to thank the amazing, supportive fans that I’ve met while on tour, but there are a lot of exciting projects on the horizon, in addition to RTE and Fight Mannequins, that I feel require my absolute 100 percent commitment and attention. I feel that this is the right time to make that happen.”