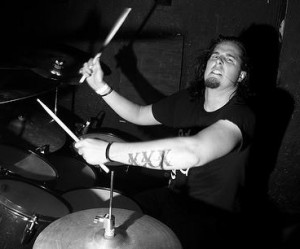 Until I Feel Nothing, Carnifex’s fourth record, was released on October 24. A lot of people have asked me if I’m happy with it, and the answer is, Yes, I am! It has some of the best songs we’ve ever written. Will you like it? I hope so. If you don’t like it, then don’t worry. Nobody’s perfect.

As one of the two founding members in Carnifex, I do a good chunk of the writing. I don’t just play the drums; I actually learned to play the guitar before I ever picked up a pair of drumsticks. I think playing another instrument helps me feel the different sections of song a little better. After all, I’m only trying to accent the music. I’ve had the unfortunate opportunity to jam with a lot of drummers that don’t really listen to the music they’re playing to. That’s probably a big reason I started playing the drums. Self-taught! No thanks, Dad! The other reason is because I had this nervous twitch in my leg all throughout high school that drumming has apparently fixed. Who knew? My mom just thought I had to pee all the time. Now that the twitch is gone, I DO have to pee all the time.

I think the question I get asked the most by young up-and-comings is, “How can I make my feet faster”? All I can tell you is, practice—a lot. Unfortunately it’s the tedious exercises that are going to make you better. Perfect practice makes perfect. You have to start with your feet slowly and evenly and build up from there.

Anywho, we are started the Brawloween Tour with Throwdown, First Blood, and Suffokate on October 21. It’s a regional tour that only hits California, Arizona, and Nevada, but six out of the eleven shows are in California, so all the people on FaceBook whining about how we never play in Cali now have no excuses. We’re also doing one more U.S. tour before the end of the year called the Discovery Tour with Born of Osiris, Veil of Maya, Structures, and Betraying the Martyr. This tour should be awesome as well. Unfortunately it skips the western half of the United States completely. Hopefully we hit blizzards and ice storms because they’re so much fun to drive through. It makes me feel so at-ease when I can feel the van and trailer sliding back and forth as I lay in the back hoping that I’m not going to be thrown out the window I’m lying next to and crushed when we roll. I’m sure we’ll be fine, though.

We’ll be playing new songs off of Until I Feel Nothing, as well as the classics. So get out to a show, and come by our merch table and say hi, because we’ll be there.

For more on Shawn Cameron and Carnifex, go to www.victoryrecords.com/carnifex.