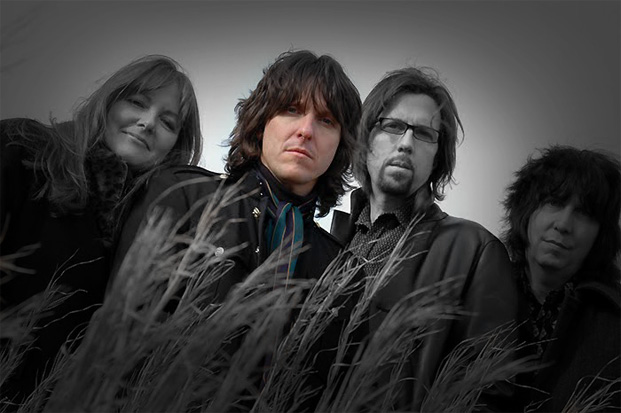 Greetings from New Jersey! I sing and play drums for the Grip Weeds, and last year we released the double CD Strange Change Machine. We’ve received many great reviews and notices for it, along with lots of back-slapping from our fans, and many regard it as our best work. A fan and fellow drummer, Chris Ryan (he’s in the Anderson Council, a band I produce at our recording studio House of Vibe) was particularly impressed with the opening track, a song I wrote called “Speed of Life.” Chris took it upon himself to transcribe my drum performance into sheet music, which is included here for free download. This article will take a look at the construction of the drum part and the music theory behind it.

It would be a good idea to take a listen to the song, as the rest of this blog relates to it. The mp3 of “Speed of Life” can be downloaded for free at www.gripweeds.com. Click on “Free Downloads.” The video for “Speed of Life” is viewable at http://vimeo.com/14051395.

In most cases I write songs on guitar and then apply the drums in a way that best serves the music. This approach usually produces the most tasteful drum parts that are only flashy when they need to be, but can sometimes result in underplaying.

The song “Panda” by a Swedish band called Dungen inspired me to write something more on the edge, where the drums took the lead—not just playing a simple beat, but doing fills as part of the beat. I applied this concept to “Speed of Life,” and taking a songwriter’s approach to the drums as the lead instrument instead of just a timekeeper, the melody and chords were written around them.

Since I’m primarily a self-taught musician with little ability to read music, I asked Chris to analyze the drum part on a music theory level. Here’s Chris:

“Difficult” was one word that entered my mind in the first few hours of my journey through “Speed of Life.” But in the end, the thing I took away from transcribing it is how beautifully simple it is. The entire drum part, even at its most bombastic moments, relates a basic theme that is expanded on throughout the song. What I eventually discovered was a great example of how well-designed variations on a simple theme can make a song irresistibly compelling.

Here is the end result on the full kit, the verse groove:

Kurt has an uncanny ability to play lightening-fast single-stroke sextuple phrases with varied accents and tom placement. He does this effortlessly, and trust me, this takes a bit of time in the woodshed. While the speed and accuracy of these fills is impressive, it’s the accents and placement of discreet notes on the toms that make the phrases work so well. This is a perfect example of how critical it is to phrase your fills with a purpose. Well-designed phrasing will always advance a song in a way that a less well thought-out, flashy display of chops can’t.

Blame it on George

Kurt, intentionally or unintentionally, added a compositional element to the song that reminded me a great deal of George Harrison’s approach to songwriting in “Here Comes the Sun.” By simple elimination of a beat, a bar of 9/8 is born. I’m fairly sure, based on my conversations with Kurt, that this was an organic occurrence as opposed to a deliberate attempt to be clever. I feel the same way about Harrison phrases like “Sun, sun, sun, here it comes” (eleven beats). This is a phrase that appeared because it felt right—it flowed naturally from the lyric. This fill maintains the same basic shape as the opening fill, but now the shuffle from the opening stanza finds its home in the rhythm of the lyric: “Mov – ing fas – ter than – the speed of.”

In sum, this was ultimately a study in songwriting first and drumming second. At first listen, I could not have understood all the details, I just heard great drumming and was interested. By going deeper I was able to learn a great deal about how having a“song first” mind can lead to a more musical approach behind the kit. Many thanks to Kurt for all his help with this project.

Right back at you, Chris. I couldn’t have done this without you! I hope this article is useful and will maybe spur drummers to think outside of the box when it comes to the groove of a song. That thinking is what inspired me to write “Speed of Life” in the first place. Thanks, Modern Drummer, and all you readers!