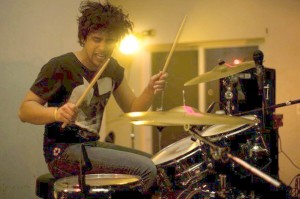 Hello, MD readers! I’m Nick Brennan from the Static Jacks and I’m twenty-one years old. I feel honored to be sharing my drumming experience with you!

I started playing the drums in third grade at Wilson Elementary, when the music teacher asked me if I had any musical talent. I told him I could clap very fast. That was the end of that. In middle school drumming became a very serious passion of mine around the time I was diagnosed with ADHD and Tourette’s disorder. For those who don’t know, both of those disorders pretty much require TONS of unwanted movement. From that movement, I gained an unstoppable energy that guides my drumming to this day.

Things got serious when the current lead singer of TSJ, Ian Devaney, asked me to play drums for the song “Stairway to Heaven” in the middle-school talent show. This was the first time I dug for inspiration and used different drummers to influence my style. I never had a teacher or real drum lessons. I taught myself the drums by plugging in my favorite music and playing along. The Strokes’ Fab Morretti was always about control. Tre Cool of Green Day and Keith Moon of the Who taught me crazy fills and exciting new kick-snare-hat beats. The drum teacher trifecta. Sorry, Nick Cannon (drum line reference).

TSJ has always worked the same way since we founded it in high school. Everyone can do anything. So since I wrote and still do write a lot of the lyrics, many times my drumming goes hand in hand with the lyrical and melodic changes—this is critical to our style. Most drummers lock in perfectly with the bass, but I just kind of ignored that. A lot of what I do as a drummer matches what Ian is singing, to really make the song fly with whatever emotion we are aiming to convey.

Now I should mention that recording our debut album, If You’re Young, was very challenging for me. I am a very live drummer; I’m spontaneous, twitchy, and unpredictable. Adjusting to playing to a click while maintaining a level of spontaneity was especially difficult. On top of that, we recorded all twelve tracks in about five days. It was the most demanding experience of my drumming career. However, we have recorded an EP since and I felt stronger, more in control, more confident. When I listen to the album now, I do feel like some of my personality got lost in some of my simplifications; so my goal for album numbers 2, 3, 4, and beyond is to try and hone my recording skills so nothing gets lost.

I recently read a quote about Dave Grohl’s drumming for Nirvana in Spin magazine, which said that he didn’t write fills, he wrote riffs. Things that you hum out loud. That is the goal for any drummer. My dream is to hear someone say to their friend, “Woah, that’s Nick Brennan on the drums. That’s his style.” And since I had the best teachers ever, I hope I’m on my way.

For more on Nick Brennan and the Static Jacks, go to www.thestaticjacks.com.