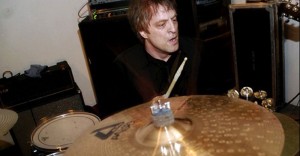 When I joined 400 Blows, I was playing with both Circle Jerks and Eleni Mandell, which are wildly divergent musical entities, to say the least. The Circle Jerks, which you may know about, is sheer physical brutality, no dynamics, just balls-out thrashing, thirty songs in an hour-and-fifteen-minute set. And it was only that long cuz Keith (gawd love ’im) would be ranting half the time! Eleni is a really great singer-songwriter from L.A., and it was ALL shading and subtlety. I had to play so softly that the joke was that instead of sticks I used toothpicks and for brushes I used eyelashes! And ne’er the twain shall meet! AND, I had never played in a punk band before the Jerks, and had never played jazz before Eleni! So I had to teach my ass how to do both. With varying degrees of success…my head was spinnin’, fo’ sho’!

But while I was playing in these bands I thought to myself, “Wouldn’t it be nice to play in a band somewhere there in the twain”? Or something along those lines…. So when 400 Blows unsuccessfully tried to kill their drummer, Ferdie, a mensch and good friend (as were they all), but succeeded in convincing him that this rock ’n’ roll B.S. was for the Byrds, my interest was piqued. Whilst at a party (where else?) I overheard them talking about trying out a mutual friend, Ryan, for the drum throne. (It should really stop being called a throne, there’s nothing royal about it) and, being the prick that I am, I barged on his scene and said, “Hey, what am I, chopped livah?!” They didn’t actually respond to that question, but replied with a question of their own: “You really wanna play with us”? To which I mumbled, “Um…sure.”

All joking aside, I soon found out that, as a drummer, this was one of the best moves I’d ever made. 400 Blows is a drummer’s dream. I get my ya-ya’s out at every turn. Welp, back up, first off, due to some aesthetic stricture laid down by lead wingnut Skot, the drumset consisted of kick, snare, floor, hi-hat, and two crash cymbals. No rack tom, no ride cymbal. So I had to do a bit of rethinking of some things, drummin’-wise. First off, I got a second floor tom, same size. Goofy, maybe, but…you ever played a flam on one tom? Sucks. BUT…do that same flam on two floor toms and it’s GARGANTUAN!

Next, and this is something I’d already been doing just to kind of (no pun intended) open up my playing, was to start coming up with drum parts and patterns playing open style (if you don’t know you better ax someone—or YouTube Simon Phillips), to make up for the lack of a rack. Poetic, I know. So, while the Blows may not be somewhere, or ANYWHERE, in the middle of the Jerks and Ms. Mandell, it was at least a sitch where I was gonna be able to STRETCH and REACH, yaknowwhati’msayin’? 5’s and 7’s all over the place, man!

Beyond that, however, we soon realized that we were really good at writing together, coming up with all kindsa messed-up stuff. Me and guitar player Scott (yeah, two Scotts) were on a roll, puking out shit at a furious rate! And I was able to contribute to writing not only on the drums, but with guitar riffs, arranging, etc. Very fulfilling, to say the least. Anyway, the proof is in the pudding, said pudding being our new album, Sickness and Health, out now on ORG. So run right out and grab it and either be sickened or healthened by it. ’Nuff said!