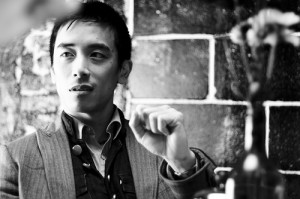 Hello, drumming universe, my name is Alex Wong. I want to thank Modern Drummer for inviting me to do this blog. I’m honored to contribute to the magazine whose back issues are still taking up three boxes of space at my parents’ house.

I am a drummer, songwriter, and producer living in Brooklyn, New York. I divide my time pretty evenly between studio projects and touring/performing on the road. I’m lucky to be involved in a diverse number of projects that use different skill sets and approaches. This year I’ve toured Europe with Vienna Teng, where I was playing cajon through effects pedals, as well as a multi-percussion setup. I toured with Elizabeth & the Catapult opening for Sara Bareilles, playing more of a traditional drumkit. Soon I will return to Europe with Ximena Sariñana, playing kit with contact mics through effects pedals.

I’ve had many great teachers in my life, but the one who helped shape my current approach to the drums and music was Kenny Watson of L.A. The most important thing he taught me was to never take anything at face value, to always ask why. He challenged me to ask myself why about every facet of my music-making as a drummer, from why I set up my kit a certain way to why I was playing any given pattern. Was it really most efficient to have the cymbals there and the tom there, or was there a better way for my particular body? He taught me to approach every part I was playing with fresh ears—just because I was conditioned to play 8th notes on a cymbal when playing “rock” doesn’t mean I should assume it’s right for every song. He gave me the freedom to question every part, and even allow myself to change or remove altogether something I assumed was fundamental, like cymbals or snare.

I apply his advice to everything I do nowadays, whether it’s coming up with a drum part, songwriting, or designing a specific setup for a tour. It’s greatly influenced my work as a producer—in tuning the drums to the pitches of the song and playing the bass line on them or only hitting kick and snare on the kit and tracking the “cymbal” part with a high-pitched note on synth. It’s freed me from making blind assumptions about parts and instrumentation and opened me up to seeing possibility and creativity in places I had never imagined before.

I’ve always tried to follow my gut when choosing the particular musical path that’s right for me, and I’m very grateful to have a life making music I believe in with the people I want to make it with. Thanks for reading, and stay in touch!

For more on Alex Wong, go to www.highceilingsmusic.com or www.thepaperraincoat.com.