Thomas Pridgen is on tour with his band the Memorials. For more info, visit www.myspace.com/thememorialsmusic. 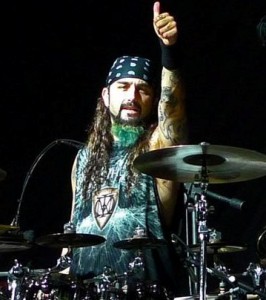 Richard Danielson is on Vintage Trouble’s debut, The Bomb Shelter Sessions. For more, visit www.vintagetrouble.com. And to watch a live performance, go to http://www.youtube.com/watch?v=lsw4ipHcMvY.

Jonathan Diener is on the Swellers’ Good for Me. For more, visit theswellers.com.

Kelly Keagy is on Night Ranger’s latest, Somewhere in California. The band is celebrating its thirtieth anniversary. For tour dates and more, visit www.nightranger.com.

Bernard Davis is on Eluriel “Tinker” Barfield’s It Is What It Is. Steve Kroon is on percussion. For more, visit www.keosp.com.

Land Richards is on Bobby Caldwell’s Live at the Blue Note Tokyo. For more on Caldwell, visit www.bobbycaldwell.com.

Jack Lawless is on Ocean Grove’s self-released EP Another Place to Stay. For tour dates and more, visit www.oceangroveband.com.

Rock ’n’ Roll Fantasy Camp comes to the New York area August 12 through 14. The weekend kicks off in New York City, where campers will meet their rock star counselors and bandmates and practice at Gibson Rehearsal Studios. After several days of jamming and rehearsing with guest stars including drummers Chris Slade and Sandy Gennaro, among many others, campers will take a bus to the Bethel Woods Center for the Arts, home of the original Woodstock festival, where they’ll be the opening act for Blood Sweat & Tears, Tommy James & the Shondells, and the Family Stone. For more info, visit www.rockcamp.com.

Felipe Torres is on tour with the Monkees (featuring Micky Dolenz). For more with Torres, check out www.youtube.com/ftdrum456.

Glen Campbell will release his final record, Ghost on the Canvas, on August 30. Sadly, Campbell was recently diagnosed with the early stages of Alzheimer’s disease. Ghost features many guest musicians, including drummers Josh Freese, Vinnie Colaiuta, and Aaron Sterling. For more, visit surfdog.com/glencampbellshow/index.html.

Mike Pietrusko is on Queen Electric’s self-titled debut. Grammy-winning artist/frontman Scot Sax wrote all the songs on the CD, and Grammy-winning producer and engineer Tim Sonnefeld produced the album. Check it out at queenelectric.bandcamp.com.

Stax Records has two new reissues. Al Jackson Jr. is on Booker T & the MGs’ Beatles tribute, McLemore Avenue, and Roger Hawkins is on the Staple Singers’ Be Altitude: Respect Yourself.  For more, visit www.concordmusicgroup.com.

Also reissued is Jean-Paul Gaster on Clutch’s Blast Tyrant. For more on Gaster, check out his MD archive interview at www.moderndrummer.com/updatefull.

Keep an ear out for Chico Hamilton’s upcoming tracks on a trio of releases in September, in celebration of the drummer’s ninetieth birthday. Also on the CDs will be drummer/percussionist Jeremy Carlstedt. For more info, visit www.joyousshout.com.

Jim Bogios is on the Counting Crows’ CD/DVD and first ever Blu-ray, August and Everything After: Live at Town Hall. For more, visit www.eaglerockent.com.

Atma Anur played drums on and coproduced Bert Elliot’s Asylum in Playland.  For more on the album, visit www.cdbaby.com/cd/bertelliot1.

Congrats to Clem Burke on being awarded an honorary doctorate of music by the University of Gloucestershire. You can check out Burke on Blondie’s upcoming release, Panic of Girls. For more on the drummer, visit www.clemburkedrummingproject.com.

Aquarian’s new website is up and running with a fresh look and an all-new Roy Burns page updated with videos, a bio, and pictures. Check it all out at www.aquariandrumheads.com.

Jose Pasillas is on the latest from Incubus, If Not Now, When? Brendan O’Brien produced the album. Check out the video for “Promises, Promises” at www.enjoyincubus.com/us/promisespromises.