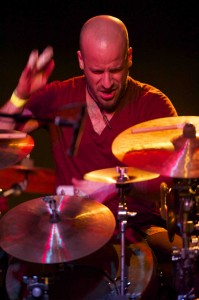 I hate drumsticks. Well, that certainly came out wrong. I love the way they sound, but not when I operate them, or rather, the way I am unable to operate them.

When I was twenty-one and living in Harrisburg, Pennsylvania, I watched a video of Buddy Rich doing a single-stroke roll so inhumanly fast that I burst into tears. Up to that moment I was convinced that I would become the greatest drummer on earth. After that video I knew my goal was worthless. Buddy was the king, and that was the end of it. How would I ever make a mark as a drummer if I’m constantly dropping sticks or can’t figure out the bounce to my satisfaction? I had a good rhythm sense and played in several bands, but my hands just could not get it…. Oh, who am I trying to kid? I was too impatient for diligent practice. So instead I decided to move to NYC to pursue my other lifelong interest: becoming the greatest actor on earth!

Yeah, right. New York quickly chewed me up and spit me out like it did to many others. I was “the little fish in the big pond” and was working a night job that might as well have been on the seventh ring of hell—I needed out fast. After seeing one too many musicians performing in the subway stations, I thought, “I can do that.” Every type of performer could be found—there were stick drummers, percussion players, bucket players, break dancers, violin players, full bands, people who painted themselves up to look like statues…. Many of these performers were perfect technicians, sticks flipping—and sometimes people flipping. I needed something different in order to make money, and playing with sticks at my level wasn’t going do it.

Then an idea that I had years ago popped into my head. I’m sure that many of you tap on the steering wheel while driving. Our steering wheels become our practice pad, and I noticed that if I tapped on the middle section of the steering wheel, the backs of my hands would occasionally hit the upper section. If only I could play djembe like this with an array of cymbals perched above—that would be something. I’d have to get the hands high enough to hit them on the upswing. We’ve all seen stick players hit on the upswing, but for more of a random flare or accent. I thought it would be interesting if every hit of a cymbal were on the upswing while playing the djembe on the way down.

I hit the bull’s eye, to say the least. Not only were people turning their heads, there were now hundreds of heads turning. They’d hear something that sounded like a drumset from a distance, but when they passed by, it was a look of shock. “Is he hitting those cymbals with the backs of his hands? Ouch!” That shocked look fueled me for the next ten years, adding cymbals and other random percussion pieces as I’d go. I was able to hook up a hi-hat that remains slightly open, which I can hit with my hands while grasping the two cymbals together for a tight “chick” sound, or hit them without grasping for an open “wash” sound. I’ve attached sticks to the tops of most of my crash and ride cymbals with makeshift springs that I can hit with my hands, and in turn they hit the cymbals. The final piece is a 10″ tambourine-type piccolo snare without the metal jingles that sits in front of the djembe at an angle. Remarkably, it sounds like a full snare when the two sounds are mixed—djembe tone vibrating off snare tone. I never actually hit the snare, its sound is all from [passive] vibration. When I play the center of the djembe it cuts out the snare and sounds like a bass tone. What am I forgetting? Oh yeah, the shaker on my leg.

If you would like to see me play this setup instead of trying to picture my inane descriptions, check out Shakerleg on YouTube. For a more in-depth look at my life as an underground performer, you’ll have to wait until my documentary film is released soon. Director Rauzar Alexander has been filming me for nearly eight years now, and the footage looks amazing. Can’t wait for you to see it.

Oh, and if you live in NYC, you can see me perform with my band the Kin every Thursday at 10 p.m. at Rockwood Music Hall. The residency is booked until the end of the year and is free to those twenty-one and over. So if you have a spare moment and want to see my fingers break off during our forty-five minute set, please come on down!