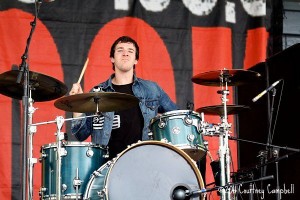 Hey, MD readers! It really means a lot to me to be a part of this blog. First let me introduce myself and tell you a little bit about my history. My name is Robert Platz, and I’m nineteen years old. At the age of nine, I was given my first (CB) drumkit to help me cope with a loss in my immediate family. Without any clue about what a “hi-hat” was, I decided to reach out for lessons at a local music store. As soon as I could keep a beat I started my first cover band, doing songs by Green Day, Sum 41, Metallica, etc. Throughout junior high and high school I was very involved with the school band and drum line. I was constantly gigging with local bands as well. At the age of seventeen, I left my home in Utah to pursue my passion in Los Angeles.

After two weeks of living in L.A., I started attending a local music school. At the same time, some future friends contacted me after seeing a YouTube cover I did of the Human Abstract’s “Nocturne.” This gave me a project on the side of constant studying. On top of attending music school I have been studying privately with some well-known drummers.

One random Sunday night I got a text message from my friends in Drive A, saying they needed a drummer. After I learned the set and did two nights of auditions, I was offered the spot as their drummer. We then had three days of rehearsals before a show at the Wiltern, which was my first date on the Revolt tour.

My home setup is a DW Collector’s series: Twisted Rainbow exotic shells with black hardware. I use DW and PDP stands and a DW 9002 double pedal. And I have two custom snares by Vision Custom Drums. My touring kit with Drive A is a Ludwig 1960s clear acrylic Vistalite with a Black Beauty snare. I use mostly K and A series Zildjian cymbals, both on and off tour.

Be sure to check out www.DriveARock.com for upcoming tour dates. Also, the band’s sophomore album, The World in Shambles, will be in stores August 9, 2011. I hope to see you at one of the shows. Thanks for reading!