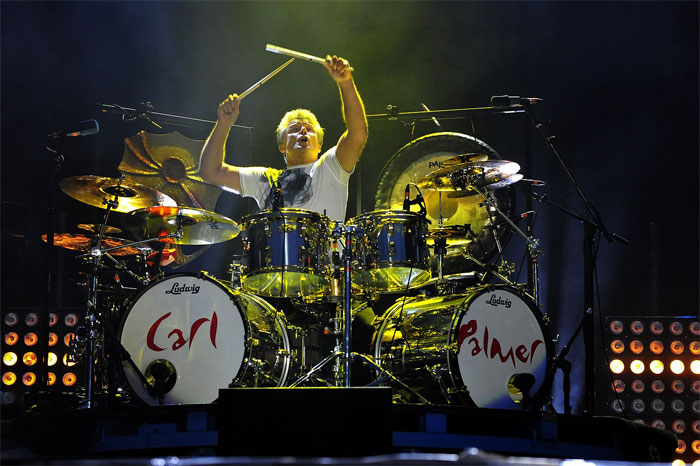 MD recently spoke with the prog-drumming giant Carl Palmer while he was on tour with Asia. Palmer, whose career spans four decades, says he has no plans to slow down anytime soon.

MD: How do you prepare for a tour?

Carl: Once I know what the set is, I play it down three or four days straight, twice a day. That’s roughly four hours a day. That’s my learning curve. I practice on my drums with pads on them so they don’t make any sound. I hit as hard as I normally do to develop stamina and calluses. The day before I leave for tour, I chill and take the day off.

MD: How was it playing with Emerson, Lake & Palmer last year in the U.K. for the band’s fortieth anniversary?

Carl: We rehearsed for five weeks, which was far too much for me. I was already playing songs like “Pictures at an Exhibition” and “Tarkus” with my band. I was already “Rolls Royced up” from playing so often. We needed to rehearse, but five weeks was a bit much.

MD: Why didn’t you just tell the others to practice on their own and call you back when they had the songs together?

Carl: [Keyboardist Keith Emerson and bassist/vocalist Greg Lake] had already done some soft things as a duo but hadn’t really played full on. Even with a sufficient amount of rehearsals back at home, it takes the first few shows to really get it under your belt. I enjoyed the show very much, but it’s not something I’d want to do again.

Carl: My philosophy is very simple: If it can’t be as good as what it was, it’s a problem for me. If it’s as good as it was, I can deal with that. If it’s better than it was—ah! For me, that’s the top. I will carry on playing as long as I think I’m improving, or at least maintaining the standard I’ve achieved. The minute I can’t maintain it, I’m out.

MD: In your own group, the Carl Palmer Band, I noticed that the other members are all pretty young. Do you feel like a modern-day Art Blakey, taking these young musicians under your wing?

Carl: That’s the pure spice for me. These guys are so good at what they do, and they’re young. They’re so enthusiastic, and all that matters to them is how good they can get. I like being around them. Sure, I don’t make the same amount of money with my own band, but hey, there’s other ways of making money. I just have to be in two bands now. [laughs] It works out. I get to carry on the music I love. I don’t want to be blues, and I don’t want to be jazz. I’m a European drummer. I love Mussorgsky, Shostakovich, and Prokofiev. I want that because that’s me.

For more with Carl Palmer, including info about his brand-new instructional DVD, check out the September 2011 issue of Modern Drummer magazine. Photo by Michael Inns.