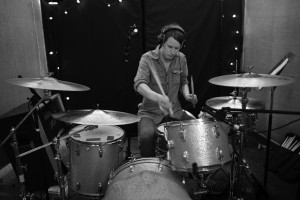 Playing the “Big Time Late Night Talk Show” gig is always something of a milestone for musicians. My colleagues and I always enjoy sharing stories of the triumphs and embarrassments of playing in front of millions of viewers, so I thought it would be fun to talk about my most recent late-show experience, playing drums with singer/songwriter Bobby Long.

The bus drove us down into Los Angeles straight from the previous night’s gig in San Francisco. By dawn, we had settled in the parking lot just outside of NBC Studios in Burbank. I crawled out of my bunk and headed inside. The studio building is huge, like the Death Star or the Superdome. Countless hallways connect different sets for soap operas, game shows, and late-night talk shows like Leno. I made my way down the hall and stopped to pour some coffee, trying not to disturb the surly union stagehands. They were arguing about the Lakers. Don’t disturb the natives, I thought, and hopped onstage to join my band for rehearsal.

We decided to play “Penance Fire Blues,” a high-energy double-time barnburner. I deliberately set up only kick, snare, hi-hat, and ride. This served two purposes: It allowed me to put all of my energy into the necessary few tools that the job required, and it freed up some visual space (showbiz!), thus increasing my odds of actually being SEEN. (The odds are almost always against you in these situations.) 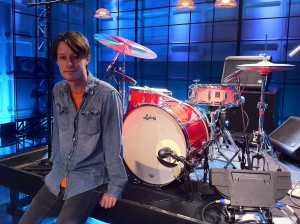 We rehearsed the tune several times, and each time, despite the early morning hours, I really “went for it,” hoping that the cameramen, who were getting their shots set up, would think to themselves, “Man, this guy is really rocking. Better get some good shots of him!” This is kind of an old superstition among drummers, and truth be told, I have no idea whether or not this technique actually works.

We retreated to the green room. Now that I think about it, it isn’t really a retreat at all because it’s always overrun with show staff, friends, and colleagues. And you can’t really go anywhere else because the staff won’t allow musicians to wander off and risk getting lost, getting drunk, or falling off cliffs. This is smart because musicians are susceptible to the dangers of all three. So we just sat there and tried not to think about what lay ahead. Incidentally, if someone ever tells you that this does not make him cripplingly nervous, he’s lying.

The only break from the green room purgatory was a quick trip to wardrobe and makeup. I sat down in a chair and tried to sit still while a makeup artist slathered foundation all over my face.

Mid-makeover, Leno popped his head in the door, looked at me, and shot off one of those, “Look out, here comes trouble!” remarks like your uncle might use at a barbeque or something.

Because I am a musician and therefore some kind of gypsy-pirate-poor person hybrid, I took advantage of wardrobe’s offer to press my suit. I had been tipped off to this un-advertised perk years ago by some more seasoned musicians, the way that hobos used to leave signs for each other on the fence posts of friendly houses: There’s free stuff here!

Finally, a producer ushered us down the hallway and into the studio, where the house band (featuring Teddy Campbell on drums) was burning away. Of course, I couldn’t process any of this because I was trying not to pee in my pants. We got settled. The cue came. I embarrassingly discovered that my usual Midwestern keep-your-head-down thoughts had been sabotaged by the thoughts of an egotistical buffoon. Do I look cool? I wonder if my friends from high school are watching. I look cool, right? Can the girl from Glee see me from where she’s sitting? Sheesh, I thought, you really learn a lot about the true nature of yourself in these situations.

Then we played and I totally blacked out. The next thing I remember, I was shaking Jeff Bridges’ hand and inviting the girl from Glee to our show at the Troubadour later that night. She never showed.

I can be found on FaceBook and on Twitter at twitter.com/markstepro. Also, a big shout-out to Scott Liken at Istanbul, Bruce Jacoby at Remo, and Chad Brandolini at Vater for making great products and for being swell guys.

Bruce Cox of Fred Wesley and the New JBs 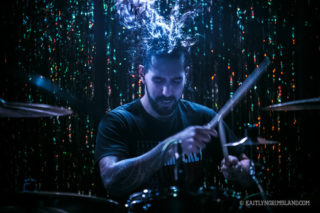