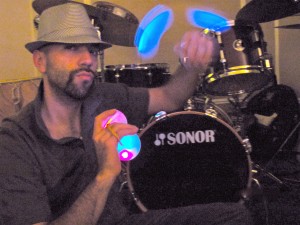 Most of us come to music with a single goal: to create. Certainly the drumset is a great starting point, since its sum was uniquely created in America even though its parts hail from a world of eclectic instruments. Isn’t it fun to see old pictures of our instrument and to think about the many ways it has been transformed through innovation—both player innovation, like drummers using fly swatters as early brush prototypes, and industry innovation, like the fantastically informative Modern Drummer magazine and website!

It is in this spirit that I—NYC drummer, special educator, and instrument maker—founded the group Glow in the Drum. This ensemble was specifically developed around a new technique in drumming that combines African and American traditions and has sonic and visual implications. The technique was inspired after two life-altering months spent in Ghana, West Africa, where I was introduced to a shaker called a televi. The televi consists of two hollowed gourds that are filled with pebbles and attached to a string, and that are released and caught by the hand to create rhythms with a “knock” and “shake.” Imagine an egg shaker on steroids.

After spending the majority of my Ghana trip trying to master the basics of televi (and studying kpanlogo, the African ancestor to the conga drum), I returned home to a humdrum routinized life. Before long I realized that I could not shake televi, and in a dream I had a vision: Play the televi off of the drums! The next two years were spent realizing this vision and forging a new technique in drumming. Tiring of the original gourds, which crack and eventually fall apart, I modernized the instrument with plastic balls and later added a visual element by making them glow with neon and LED lights.

If you’re not in the NYC area, we can set up a lesson over Skype. Just drop me line at glowinthedrum@gmail.com. I also use televi and traditional drumming with the kids band King Pajama. In addition, I play African percussion for the rock band Cosmolingo.

For more on televi and the group it inspired, go to www.glowinthedrum.com.