I will start out by saying this: When I was first asked to be a part of Infamous 2, my involvement ended at being a drummer. Now, a year later, and having made my leap into the vast world of video game composing, I am humbled and excited to get an opportunity to blog this personal tidbit. 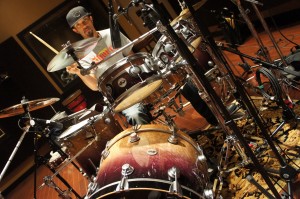 The composer seed was initially sowed at a lunch meeting. There, a couple of guys from Sony including one Marc Senasac, one Jonathan Mayer (more on this heavyweight later), and I sat discussing the game’s direction. Any of my fans who are reading this know me, and know what kind of an attitude I have (see Joe Pesci in Casino). So naturally, after we were done chatting about the drumming particulars, I started in about how I had just built a new studio in Venice, California, and how its vibe destroyed everyone else’s. The truth is, I thought I was getting away with something by acting like Mr. Know It All, when I was actually just trying to cover up for the fact that I was new to composing in a conversation that was peppered heavily with the subject.

Somehow I ended up, in all my boasting, being propositioned with doing a demo. At this point I had to follow through, and was actually thrilled that these guys were cool enough to give me a shot. It wasn’t at all what I came into lunch expecting, but by the time I left I was hell bent on giving it my best.

What happened next you already know! I got the gig and was stoked about working with such a rad new crew in a new area of music. My process for composing, though I will not (as my mentors have taught me) divulge my methods in their entirety, included but were not limited to:

For those of you who need Cliffs Notes on Infamous 2, the game basically revolves around this badass guy, Cole MacGrath, who runs around and blows s**t up (this time, in a new city of New Marais). It’s anything and everything you would want to do in real life but can’t. I found that combining bent Creole-infused melodies with janky sounding, second-line rhythms and flowing string parts was my winning combination for the game. There were a couple of times over the course where I might have even pushed the envelope too far, and Jonathan (music supervisor and aforementioned heavy) was always super supportive and helpful during my writing process.

All in all I have to say that the experience and knowledge I gained from this project will never leave me. I learned things like: In order to look like you know what you are talking about, you should wear an ascot to scoring sessions with the orchestra. I also learned that if you put the right team together, magic can happen—I believe that’s what we found over the course of this last year together.

Willy Wonka said it best: “We are the music makers, and we are the dreamers of dreams.”