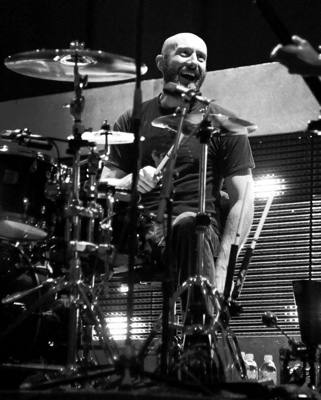 Killswitch Engage drummer Justin Foley doesn’t quite fit in with the normal metal drummer stereotypes. For one, he’s classically trained, having received his undergraduate degree in percussion from the University of Connecticut and his master’s degree from the prestigious Hartt School of Music. When not touring he often plays with symphonies, cites the marimba as his favorite orchestral instrument, and lists modern composers like Michael Burritt and Joseph Schwantner alongside Charlie Benante and Sean Reinert as some of his influences. He also favors a comparatively tiny kit over the metal mammoths that have come to dominate the genre. Foley gets some monstrous sounds from his diminutive kick, though. He’s capable of playing double bass at breakneck speeds, but also incorporates the technique into unique, jazzy fills. And he can navigate shifts in time and feel with amazing fluidity, such as on “A Light in the Darkened World,” off of Killswitch’s 2009 self-titled release.

Foley joined metalcore pioneers Killswitch Engage in 2003, first appearing on their gold album The End of Heartache (2004). Since then, he and his KSE bandmates, who are also highly schooled—guitarists Adam Dutkiewicz and Joel Stroetzel attended Berklee College Of Music—have toured the world and delivered melodic metal hits to the masses appearing on tours such as Ozzfest, Vans Warped Tour, and numerous headlining treks.