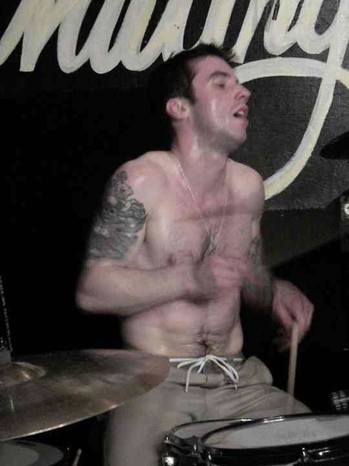 Hi, I’m Michael Curran and I was born in Berwyn, Illinois, and raised in Stickney, later moving to Naperville for better schooling. I grew up listening to my father play the keyboards and discovering how to make music. My Uncle Sean played blues guitar at most family events and let me borrow hundreds of jazz CDs to train my ears. Before I had my own drumset I would tape markers together to create sticks to hit until they would explode in my hands. I got my first job at a pizza spot when I was thirteen, saved up enough money for a drumset, and started making music every day.

I’ve been reading Modern Drummer magazine since I was twelve years old and have always been inspired by new artists and products featured, so this is my way of giving back in this blog. For the past few years, I’ve been on my hustle making music. I just got back from a great trip at SXSW. I performed with Add-2 and Slot A at the Light Bar for the Taste of Chicago showcase. The rooftop show was amazing, with a ton of great artists and fans. Austin, Texas, was full of great people from all over the world. I had a chance to hear a lot of great music and network with good people. If you’ve never been to SXSW, please make plans to go next year; it will change your life! After SXSW I played with Add-2, opening for Black Thought from the Roots—which was a big show for. I’m back on my grind in Chicago now doing weekly gigs, teaching drum lessons, and staying busy.

I’ve been working on Alan Dawson’s Rudimental Ritual, left-foot clave, one-handed rolls, and crazy gospel drum fills. I like to fuse all styles of music together to create my own thing. I’m openminded to trying things—like using a violin bow on a cymbal for different effects, or playing washboard and drumset at the same time.

I just finished recording drums for Million Dollar Mano for his new group called the Bad For Somethings, which should be out later this year. I play for a funk band called Agents of Change as well, and we came out with an album last year called Sucka Free. I also play for a rock band called Decibel Hogg, which gigs a lot and also just finished recording—that will be coming out in May. I’ve been gigging with a blues guitarist called Hector Anchondo, and I’m also in a rock ’n’ roll group called Wake Up Siouxsie.

I’ve been performing live with rapper Add-2 in the Chicago area, and I do live/recording remixes with DJ Hector and Johnny Eichem called We Make It Better. I play percussion for a ska band called Evil Empire. I’m also a studio musician for Music Industry Workshop at Studio Chicago, and I teach drum lessons as well. That’s real talk on what I’ve been up to recently. I like staying busy, and I’m only going to get busier. If you have any questions, feel free to contact me any time at mhcdrum@gmail.com. Thanks so much for reading!