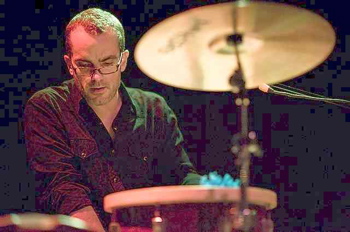 2011 is off to an exciting start for me as I prepare for a short radio promo tour followed by rehearsals and tours throughout the year with singer-songwriter Jason Reeves.

Some of you may know of Jason and some may only know his songs that have been covered by other artists. I began working on and off with Jason in Los Angeles in 2005, and I started full-time with him in 2008. Jason was signed to Warner Bros. by former American Idol judge Kara DioGuardi, and is one of the most sought-after new co-writers in music today, having multiple hits around the world and collaborations with artists from Colbie Caillat to Kara DioGuardi to Lenka. We will be touring in support of Jason’s new album, The Lovesick, scheduled to be released on Warner Bros. this summer.

When we’re on the road, I get a lot of fans asking me about my kit—or should I say my “hybrid” kit. They always seem to ask me about two things: the paint tray and the drum case kick drum.

Over the years, because Jason and I have traveled so much doing duo shows (acoustic tours, in-stores, radio station performances, etc.) outside of the full-band shows, I’ve gotten into the habit of traveling light and getting creative with what I pack for the gig. After all, they say that necessity is the mother of invention, right? Well, in 2007 I was preparing for an eleven-week duo tour with another artist, and we had a lot of flights—thirty-nine, to be exact. I wanted to pack as many “toys” as I could into two cases, which I would take as my two allowed checked pieces of luggage on airline flights. In this process, I started by packing my Cajon in an old floor tom case. It didn’t take long for me to realize that once I was set up and looking at an empty floor tom case, I was only one kick drum pedal and one microphone away from using that empty case as my kick drum. (I’m not claiming to have discovered this, as people have been kicking suitcases and boxes for years.) I lay the case on its side, place a Shure Beta 52 microphone inside on a custom piece of foam shaped to allow the microphone to lay facing upward, then I carefully place the lid on and strap it shut. I also run a short XLR cable out of the case so the engineer can just plug right in.

I get a lot of engineers who might laugh or question it while we’re setting up, but they are always the first to compliment me after the show or even at soundcheck on how great that case sounds and how they didn’t have to EQ it much at all. Most engineers are blown away.

Another fun part of my rig is my paint tray or paint roller pan.  That’s right, like the cheap metal pan you use when you paint your walls at home. In 2007, when I was doing some overdubs for my debut percussion album, Voices In My Head, I came up with this process of listening to the track I had recorded, hearing a part in my head (a counter rhythm or melody) and then finding that “voice” and recording it next. Sometimes what I was imagining was a drum, shaker, cymbal, or chime that I already had. But more times than not, it was a sound that I heard but didn’t have, so I would have to make something to create that sound. This resulted in me picking up a metal paint roller tray that I had lying around and throwing some cacho seed shakers into it. This created an amazing 808-type sound. It ended being the snare drum you hear on track two on my album, “Manhattan Shuffle.” I still use it today on stage, and people seem to love it.

As I view myself as more of a percussionist than a drummer, I like to have fun with what I do. I prefer to have a lot of color around me to choose from in the form of shakers, mallets, and brushes, sizzle beads, etc. I also prefer subtlety to volume and rely upon organics for my tone. My current touring rig with Jason consists of: my floor tom case/kick drum; “Woody,” my 1960 Ludwig Auditorium snare with wood hoops; a Fat Congas string cajon; a 16″ Ludwig Legacy floor tom; a Roland SPD-S with one KD-7 and one PD-8 external pad; my paint tray w/cacho seeds; 16″ Paiste custom hi-hats (Paiste Traditional Thin crash as top, Paiste Rude crash/ride as bottom); an 18″ Paiste Signature Full crash; a 22″ Paiste Traditional Light ride; and a variety of shakers, cacho seeds, jingles, mallets, and other texture-making items. With this hybrid kit, I am able to support the many moods of a Jason Reeves live show, which could be anything from a ballad to a rocker to re-sampling the sounds from the new album. It’s a pretty powerful non-traditional kit, and it’s a lot of fun to play!

When I’m not on tour I can most likely be found in my personal creative haven, known as the Drumperc Studio. I opened the studio in 2003, and over the years it has allowed me to create and record for countless clients and projects all over the world. It is simply a web-based drum studio equipped with sixteen channels of drum-friendly microphones, pre-amps, compressors, and A/D conversion. I call it web-based because that’s how I retrieve the files from clients. After I record my parts, I upload my files back to a server on the web for clients to download at their convenience. Although I love going to a big studio and working with a team of musicians and engineers, having the Drumperc Studio at my fingertips is a great and convenient way for me to stay creative and supply quality audio files to producers around the world in a timely fashion, with little to no wait time or scheduling conflicts.

That’s it for now. Until next time, stay creative and inspired. Keep drumming and making that ear candy! Thank you, MD, for having me, and come see me on the road this summer with Jason Reeves.

For more on Billy Hawn and Jason Reeves, go to www.billyhawn.com or www.jasonreeves.com.