Hey, MD readers! I’m here to talk about the latest single from Egypt Central, “White Rabbit.” This is the title track off our sophomore record. We’re extremely excited about this record and single and we hope you all enjoy it. Although the song’s inception was relatively quick, we rolled up our sleeves and worked our fingers to the bone on it.

“White Rabbit” started in pre-production as an upbeat metal song, with what is now the chorus as the original verse. When we went in to record the song, we blended another song with it, removing the original verse completely. After we finished those recordings, our bass player, Joey Chicago, and I flew into Nashville for a writing session with producer Skidd Mills (Saving Abel, Skillet), and we showed him this scrapped verse among other pre-produced songs. His thought was to make a creepy-sounding song that matched the feel of the words: “Your magic white rabbit has left its writing on the wall. We follow like Alice and just keep diving down the hole.”

Skidd had an idea for a killer opening guitar riff. Joey and I had been compiling a library of rock-like guitar riffs for years, so we had a lot to work with. Once we wrote the guitar for the intro, verse, pre-chorus, and chorus, we started to formulate the drum part. I had an idea for a monstrous drum intro, and the guys loved it. Skidd had an awesome groove idea for the verse, and we all knew what we wanted for the chorus. For the bridge of the song, I had an old guitar riff that we used on a song sent to us by a writer for Lenny Kravitz. I know that sounds funny, but we ended up loving the music we set behind the lyrics, but never recorded the song. It was a perfect fit. We filled in the words around the chorus, and the song was complete. So, out of the ashes from a recording once lost and a pile of guitar riffs collected, we formed the song “White Rabbit.”

“White Rabbit” will be released to iTunes in March, and we start touring heavy this year as well. Thanks to MD for the opportunity and the honor to blog for moderndrummer.com. I actually bought my first copy of MD when I was sixteen. Look up me and the band on FaceBook and let me know what you think of the single. Thanks again, and happy drumming! 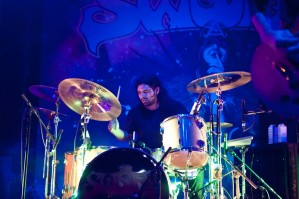