Hey, Modern Drummer fans! I hope you’re all busy playing your butts off out there! As some of you may know, four years ago I made the big decision to retire my position as artist relations director at Paiste, after having the pleasure of that great gig for nineteen years. It was a hard decision, as I made so many great friends and learned so much. Many of those wonderful artists are still close friends today, and it just keeps growing!

I now split my time between performing, recording, writing, and producing. As a twelve-year member of the Glenn Frey/Joe Walsh band, an offshoot project from their “day” gig in the Eagles, I recently performed with them at the 2010 Aspen Snowmass Jazz Festival, to a sold-out crowd of over 7,000. It was a great show and also featured Wilco, Black Crowes, and Lynyrd Skynyrd. Other shows this year with Glenn included a headline spot at the prestigious Muhammad Ali Celebrity Fight Night concert, which also featured David Foster’s All Star band, including John “JR” Robinson on drums. It was an honor to share the stage with my good friend John. We also played a great show here in L.A. at the House Of Blues, where we had the legendary producer Don Was playing bass with us.

Another band that keeps me quite busy is Venice. A local southern California institution, Venice has been recording and touring for over thirty years, and their original drummer, Scott Crago, now the Eagles drummer, introduced them to me years ago. They remain one of my favorite bands, and we’ve recorded and played hundreds of shows together, including touring Europe. Along with Jackson Browne, Venice is the co-founder of a foundation called Artists For The Arts. We’ve done numerous shows over the years to raise money for school arts programs—a much-needed cause. At each show we feature name artists that we’re the band for, and in the past few years we’ve shared the stage with Dave Mason, Billy Idol, Michael McDonald, Colin Hay, Chris Smith of Tears For Fears, and of course Jackson Browne. Venice consists of four amazing singers who are the younger brothers and cousins of the famous vocals group the Lennon Sisters. They’re currently on tour as Roger Waters’ background vocalists on The Wall tour.

Recent projects I’ve done include playing percussion on Jonathan Clark’s debut CD, I’m Just Sayin’. Jonathan is the bassist/vocalist for Glenn Frey, Dwight Yoakum, and many others. His CD also featured Curt Bisquera on drums and actor Gary Oldman on vocals. I’ve also been the studio recording drum tracks for some great artists, including fifteen-year-old gospel/country singer Brooke Pernice, for her debut release, Lead Me Home. This record features Grammy-winning producer John Wooler, Tom Wait’s Larry Taylor on bass, and Counting Crows guitarist David Immergluck. I also just finished the drum tracks on the upcoming record for singer/songwriter/actor James Morrison. James is known for his many staring TV & film appearances, including his acclaimed role as Bill Buchanan on Fox’s hit show 24 and his current role as John Morrissey on TNT’s Hawthorne, and this will be his first musical release. Fans of rootsy folk-rock will love this record. Speaking of actors, about six years ago I played percussion on actor Jeff Bridges’ debut recording, Be Here Soon, and since he won an Academy Award for best actor for his performance in Crazy Heart, the CD has been gaining more attention.

The latest project from my production company, RAM57 Productions, is a documentary film titled Tonal Spontaneity, which focuses on the spontaneous creative process through various forms of art. I’m very much enjoying the production process. A few years ago, after Paiste, I worked for a record company called NovaTunes and produced all their artist video content, so since then I’ve maintained my relationship with a great young filmmaker named Zayde Naquib. He and I are creating this film together, and it features some amazing artists including musicians Terry Bozzio, Alex & Nels Cline, Butch Norton, and Kalani, as well as actors James Morrison and Mary Lynn Rajskub. The film features a very cool spontaneous performance with spoken-word/djembe artist Rich Ferguson, with Terry Bozzio and me on percussion. There’s also an improv dance and percussion performance where Butch, Rich, Kalani, and I accompany four of Celine Dion’s dancers. Anyone interested in creating art in the moment will find this very interesting. We look forward to a 2011 release.

I also keep busy writing for Modern Drummer and am currently finishing an upcoming feature on Lou Reed’s drummer, Tony “Thunder” Smith. This is one I’m very excited about and that I think you’ll all enjoy—Tony is an amazing drummer and has great insight.

Thanks for reading, y’all! For more info, including my performing schedule, my articles, and progress on my upcoming film, please go to www.richmangicaro.com. 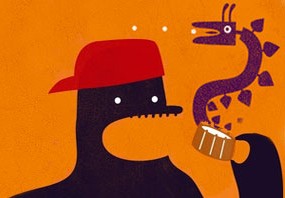 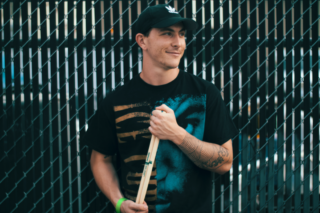 On the Beat with Truman Berlin of Kingdom of Giants: Talks Tours and Shares Drum Play-Through