Back then I was a surprisingly rare specimen known as a female drummer in an otherwise male band. There were not many of us that I knew of at that time. Arika Casebolt of Circus Lupus, Amy Farina of the Warmers, Katherina Bornefeld of the Ex, Janet Weiss of Quasi—all stupendous, powerhouse, kick-ass drummers, regardless of gender. (I know there were more, but this is not meant to be a comprehensive list. Just mentioning a few off the top of my head.) It may surprise readers today to hear that just a decade ago, people could not believe their eyes or ears when they discovered that a woman could be marginally competent on the drums. Then again, it may not surprise readers because, honestly, sometimes I still feel like a novelty act.

I started playing drums in school band when I was around eleven years old. I got my first drumset at fourteen and started my first band. We didn’t have a name; we were just three dorks jamming in my bedroom after school. My first real band with a name and gigs was the Fixations, from Bloomington, Indiana—the one and only all-girl band I ever played in. After the Fixations, I joined the Belgian Waffles, a long-running “garage/other/experimental” band that still exists in some form or another. In 1991, I moved to Olympia, Washington, to attend The Evergreen State College and to check out the exploding music scene. I was very quickly invited to join Witchy Poo, kind of Olympia’s version of the Belgian Waffles—experimental, no permanent members, pretty much indefinable.

In the summer of 1992 I joined Unwound after their original drummer, Brandt Sandeno, quit. Thanks, Brandt! Within six months we had recorded our first LP, Fake Train. New Plastic Ideas, The Future Of What, Repetition, Challenge For A Civilized Society, Leaves Turn Inside You, and numerous 7″s and comp tracks followed over the next ten years. My experience making music with my bandmates, Justin Trosper (guitar/vocals) and Vern Rumsey (bass), was completely invaluable. We operated as a classic power trio. We were a band. We wrote our music together. Our music sounded the way it did because of the styles each individual player brought to the table. And because we were so young when we started out (eighteen to nineteen years old), our styles and musicianship developed together so that eventually we had a psychic connection, allowing us to communicate musically in some realm outside of ourselves, outside of our words or our heads. Our notes and rhythms found one another without much prompting. And believe it or not, we didn’t really take that many drugs! We were also extremely lucky to live in a town and during a time where we had tremendous support. It was definitely a DIY music scene, but we couldn’t have Done It Ourselves without our community. Okay, now I feel like I’m giving an awards speech. I’d like to thank the members of the punk rock academy for recognizing Unwound….

Flash forward to today—fall of 2010. I am about to embark on my first major tour in eight years. I’ll be on the road with the Corin Tucker Band. I am very lucky to be playing with these fine and talented folk—Corin Tucker (Heavens To Betsy, Sleater-Kinney), Seth Lorinczi (Circus Lupus, Golden Bears), and Mike Clark (the Jicks, “Sassiest Boy In America 1991”)—all of whom I have known and respected as musicians for going on a couple decades. We have an album, 1,000 Years, coming out on Kill Rock Stars on Oct 5. This tour will be extra tantalizing, as we are bringing three out of four of our children on the road with us! (I can only claim one of them as my own.) Mayhem and shenanigans to ensue!

I have also spent the past few years playing with my own band, Hungry Ghost, with two other amazing players whom I have known for eons—Andrew Price (Irving Klaw Trio) and Lorca Wood (the Drags). We are very excited to be opening the Corin Tucker Band shows on the East Coast. So for those of you back East, come see me do my thing for two sets a night! Two very different bands, playing very awesome music. Both bands proving that a bunch of parents pushing forty might actually rock harder than these kids today. I’m just sayin’.

I have had the Ludwigs since I was fifteen years old. It was my one and only set until I got a job at a secondhand music store in Portland, Oregon, called Trade Up Music, and bought myself a 1968 Champagne Sparkle Rogers 12/16/20 kit. But that beauty mostly stays in my basement.

I guess I should also mention that I am entirely self-taught, but for about three years in school band where the only thing I learned was how to hold my sticks and count rests. I had a passion for rhythm and drumming at a young age and have spent years of my life listening to the drummer. But not just the drummer. I listen to how it all fits together; I find the rhythm and the feel in all the pieces. I believe drums are a musical instrument and we should attempt to play them as such. Listen, drummers, listen. And if you’re lucky, the other players will listen, too.

Drumset shot by Julie Forward. Portrait by John Clark. For more on Sara Lund and the Corin Tucker Band, go to www.killrockstars.com. 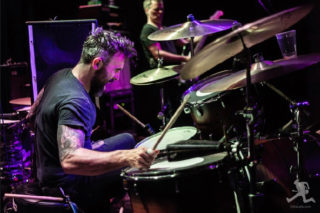 On The Beat with Ryan Harding of Local H: Talks New Single, Touring, and Influences

Gregg Bissonette “After All??? Chart and Drum Groove Video

The Beat Goes On for Whitney Houston