Hey, MD world, I’m Paul Wandtke, and I’m here to tell you what I’ve been up to, as it’s been a while since I’ve spoken to my MD friends. 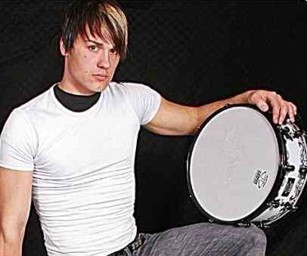 I’m currently on tour playing drums for Kill Hannah, and we are and have been main support for the Smashing Pumpkins. You might remember Kill Hannah from their singles “Kennedy” (2003, Atlantic Records) and “Lips Like Morphine” (2006, Atlantic Records). It’s simply amazing being able to share the stage with the Smashing Pumpkins, let alone have the chance to play in sold-out venues across the States. I’m so fortunate that Kill Hannah asked me to play this run with them!

The band’s current drummer is on tour with Ke$ha, and their regular sub drummer broke his arm five days before this tour. I only had seventy-two hours to learn fourteen songs before having to hit the road. It was a lot of hard work, not only physically but mentally. I’m even in charge of running/cueing the tracks that we play with—man, talk about stress! There’s no room for improvising or having the chance to change the song structures night to night, because I’ve got to play “dead-on” sexy/loud rock grooves (with a hint of funk in them). To be honest, it was stressful the first couple gigs, but now it’s a blast. Even the team and staff behind the Smashing Pumpkins can’t believe this little story, as they thought I was Kill Hannah’s full-time drummer.

Anyway, now it’s time to talk about where the inspiration of delving into the journey of becoming a professional drummer started for me. Quite frankly, it’s because of Modern Drummer! Yes, it’s true. After being featured in MD’s “On The Move” section in 2004, the experience from the press release gave me the hope and inspiration that I needed. I simply thought that if I could be in a magazine once, I could probably do it again, if I took the right steps forward with my drumming. I practiced every day and made plans to attend Berklee College of Music. It was hard and treacherous work to get to Berklee, both financially and musically. I had to hold a day job for two years to build credit to take out my own loans for Berklee, because no one in my family wanted to deal with any part of the debt that I was going to partake in with my Berklee studies/adventure. It was tough!

In the sense of “music knowledge,” I didn’t have much at all, as I was totally self-taught at the time. I wasn’t aware of where middle C was on a keyboard, let alone what a quarter note was or even looked like on staff paper. My hard work paid off, however, as I eventually got the chance to study at Berklee after receiving my associates in arts from Joliet Junior College, where I studied mallet percussion, timpani, and snare. At Berklee, it was surreal having the chance to study with industry pros such as Rod Morgenstein, Mike Mangini, Kenwood Dennard, Skip Hadden, and many others. It was just cool to be around these guys, too, especially Rod. He’s a super cool cat.

Thanks so much, MD, for this blog opportunity, and a very special thanks to professional drummer Joe Babiak for his friendship and constant mutual support over the years. Plans for this year and next are to continue teaching my online Skype students, touring/recording, and my freelance magazine drum lessons, one of which will be published very soon in the wonderful Modern Drummer magazine. It’s an article about live drum soloing in the rock/metal context, and I hope MD readers will enjoy it.

Check out this quick clip of my life on the road thus far with KH, as it contains some live drum cam footage, backstage clips, and Kill Hannah’s thoughts about my drumming: www.youtube.com/watch?v=KpBOzkdNf80. Drum on!