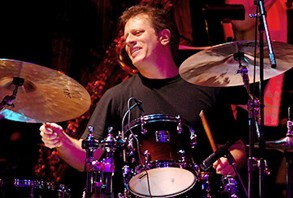 In April of 1984, Modern Drummer ran an “Up And Coming” article on a young drummer from St. Louis who’d just landed his first high-profile gig, on the Simon & Garfunkel reunion tour. His name was Dave Weckl. He came with some serious credentials and recommendations, and everyone on the scene agreed that he was a guy to watch.

Only seventeen months later, in October of 1986, Dave was on the cover of MD. He’d built a reputation as a first-call New York studio player, as well as landing the drum chair in Chick Corea’s hot new Elektric Band. The band’s tour program carried a heading that read “Introducing Dave Weckl.” But by that time the then-twenty-six-year-old needed little introduction. He’d been the buzz on drummers’ lips for more than a year. Dave’s breathtaking combination of finesse, sensitivity, chops, and power had earned him the most prestigious word-of-mouth title in musical Manhattan: “The Next Guy.”

By September of 1990 and his next MD cover, Dave was a bona fide drumming superstar. Besides several albums with Corea’s Elektric Band and one with the stripped-down, straight-ahead Akoustic Band, he also appeared on albums by Steve Khan & Eyewitness, Chuck Loeb and Andy LaVerne, and the S.O.S. All-Stars, as well as two albums and a video by Corea bandmate John Patitucci. On his own he had released a cassette/book package of play-along material called Contemporary Drummer + One, as well as two DCI Music videos. And that year saw the release of Dave’s first solo album, Master Plan. By this point, Dave Weckl was unquestionably the guy.

Very few drummers have had as dramatic an impact on the entire drumming industry as Dave Weckl had in the late ’80s and early ’90s. Drumsets were designed and sold based on the configuration that Dave used. Drummers by the thousands sought to emulate his playing style…and in turn influenced the way music was created, recorded, and performed. For a significant period, it seemed as though if something wasn’t done the way Weckl would do it, it simply wasn’t hip.

Dave established himself by performing with some of music’s most creative artists, including the aforementioned Chick Corea, along with the Brecker Brothers, Michel Camilo, and Bill Connors. When it came time to record as a leader, Dave surrounded himself with equally talented cohorts, including guitarist Buzz Feiten, bassist Tom Kennedy, keyboardists Jay Oliver and Steve Weingart, and saxophonist Brandon Fields. Dave’s musical output reflected an ever-expanding perspective.

Still on a constant search for the next challenge, these days Weckl works much of his magic behind the glass, producing artists at his world-class home studio, the Garage, but also continues to astonish us with his drumming skills playing alongside artists like Mike Stern, Chuck Loeb, and Oz Noy.