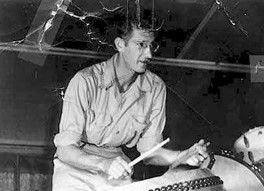 Hi, Modern Drummer readers. My name is Pamela Ventura, and I am a good friend of educator/player Pamela Manganaro, who put me in contact with MD. This blog is a little different from the ones that usually run, but I wanted to make it a surprise for my dad, Don Kidwell, who has been a smokin’ drummer for seventy-five years now. Drumming has been his whole life, and it was really hard for him to give it up. He recently turned ninety-two years old and his health has been slowing him down. He’s been beating on things since he was fifteen, finding a rhythm on pots, pans, glasses, tabletops, and anything else that made a satisfying sound. He used thimbles on a washboard until he finally persuaded his dad to get him a drum kit at seventeen, and he’s never looked back.

My dad’s career started in 1935, playing with trios in various beer joints in his hometown of Columbus, Ohio. The war took him away and put him in exotic locations like Ft. Bragg and Camp Butner in North Carolina, where he met his future wife, dance partner, and roadie, Jean. In 1943 he played in the 7th Infantry band and kept the troops entertained on Attu and other locations while Bob Hope was busy elsewhere. Back home in 1946, he played with Jack Maynard and big-name bandleader Cecil Golly, whose catchy slogan was “Dance And Be Jolly With Music By Golly.”

His career continued as he traveled throughout the Midwest with bandleaders like Frank LaRue, Eddy Kramer, Howard Gorman, Howdy Maeger, and Jerry Johnston. More recently he’s been appearing with the Nocturnes, Big John’s Big Band Sound, and the Bernardo Heights Quartet in Rancho Bernardo, California. At ninety-two, he was giving the other band members a run for their money and inspiring the people they played for to get up and dance! Their fans range from country club members to retirement home residents, and all of them were disappointed last month when Don decided to pack up his kit and retire. He still plays at home, though, so he doesn’t lose that edge that he’s been accustomed to his whole life. His drum legacy has been passed on to his son, Pete, who plays in several bands in Paradise, California, and who retrofits and makes custom drum equipment for other enthusiasts.

As my dad’s business card says, “Old age and treachery will overcome youth and skill.” He still has the skill, even though old age is sneaking up on him—and treachery never had anything to do with it. I’d like to personally thank Modern Drummer for giving me this opportunity to make his dream come true. I know when he sees this he will be honored, as he has always been a big fan of the magazine. Thank you for reading, and may we all play on forever!