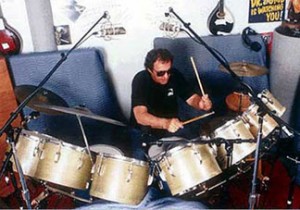 Musicians love to argue about things like, What drummer played on the most records in history? Some figure it’s got to be R&B great Earl Palmer. Other folks say, What about Steve Gadd; he’s been a first-call studio cat for the better part of three decades. Then there’s those who reckon that drumming legends Jim Keltner and Vinnie Colaiuta are the most prolific. In the end, stats and figures matter little to the art of music-making. Still, one fact that very few experts would dispute is that Hal Blaine, of the famous LA studio conglomerate the Wrecking Crew, has played on more recognizable, beloved, and historic songs than any other drummer who’s been on the receiving end of that famous exclamation, “Rolling!”

After early drumming experiences on the East Coast, where he was exposed to the multi-talented actors and musicians of vaudeville, as well as the rhythm ’n’ blues of his largely African-American friends and neighbors, Blaine moved with his family to California. The drummer did a stint in the service, then decided to hone his stick-craft with serious lessons. One thing led to another, and Hal found himself a favorite go-to guy for top producer Phil Spector, who had nearly invented the teen-pop phenomenon with girl groups like the Ronettes.

This was the dawning of the golden age of rock ’n’ roll, when the good-time ’50s were morphing into the heady ’60s. By providing the crafty and inspired drumming behind such hits as the Crystals’ “He’s A Rebel,” the Beach Boys’ “God Only Knows,” and the Mamas & the Papas’ “California Dreamin’” (sometimes double-drumming with his early supporter, Earl Palmer), Blaine came to define the drum beat of Top-40 radio. To this day, if you turn on an oldies or classic-rock station, in due time you will hear Hal Blaine. And if you listen carefully, you’ll receive an education on “playing for the song” that you won’t get anywhere else—not in an instructional book, not from a drumming DVD, not even by seeing your favorite band live. Hal Blaine, simply, defines pop drumming like no other drummer before or since.