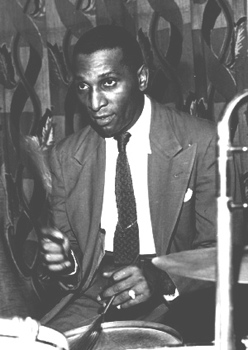 Cozy Cole, an incredibly adept player, was strongly rooted in the rudimental style, but he contributed much to jazz drumming. One of the first players to develop his own brand of hand and foot coordination, he mastered the technique thoroughly, performing solos more complex than anything that had previously been done. Cole was also known for playing four different rhythmic figures at one time (figures often divided between straight 8ths and triplets), giving the effect of two drummers playing simultaneously. His experimentation with coordinated independence was way ahead of its time, and previewed the bop drumming style of the ’40s.

Cole was born in East Orange, New Jersey, in 1909, and began drumming at the age of five. Though influenced by Chick Webb, Gene Krupa, and Jo Jones, Cole was initially inspired by Sonny Greer. By 1930, he was recording with Jelly Roll Morton, and shortly thereafter went on to play with Benny Carter, Stuff Smith, and Willie Bryant.

Cole achieved national prominence between 1939 and ’42 in Cab Calloway’s band, where he was featured on legendary recordings like “Crescendo In Drums,” “Paradiddle Joe,” and “Ratamacue.” After the Calloway years, he worked and recorded with Lionel Hampton, Coleman Hawkins, Roy Eldridge, Jonas Jones, and Louis Armstrong’s All Stars, and in 1945 he recorded with Charlie Parker and Dizzy Gillespie. Cole also worked on Broadway, and was one of the first black musicians hired as a staff player by CBS radio. During the ’50s, his recording of “Topsy, Part 1” was a nationwide hit, one of only a handful of drummer-recorded hits.

Bob Breithaupt, percussion instructor at Capital University in Ohio, recalls Cozy Cole: “What he did between his hi-hat and bass drum were primarily tap dancing things. Then he’d simply play on top of it. But during the ’30s, that was pretty significant because no one was doing it. His solo techniques were really amazing. He found he could superimpose rhythms on top of one another and get some real interesting sounds. He obviously had some coordination that most people didn’t have.”

In 1954 Cole opened a school for drummers with Gene Krupa and built a solid reputation as an instructor, with Philly Joe Jones among his many students. Cole died in 1981.