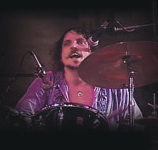 A hallmark of Richie Hayward’s style is his feel. The New Orleans influence is all over his playing, especially in the way he approaches shuffles and second-line rhythms. Here are a few of the drummer’s Little Feat highlights.

“Time Loves A Hero” The irresistible intro groove on the version from the classic live album Waiting For Columbus is funky as the dickens, with a pocket a mile wide. Also check out the counter time on the bell of Hayward’s ride, and his left-foot hi-hat work.

“Spanish Moon” A fat 2 and 4 on top matched with a killer kick drum punch. The rhythm defines the song.

“All That You Dream” Hayward rocks the song silly. Snare accents off the straight-four pattern with 8th-note bass drum clusters set up glorious tom fills, which lead to perfectly placed cymbal crashes against the vocals. Ferocious from beginning to end.

“Oh Atlanta” Really, can anybody play a blues shuffle the way Richie does?

“Dixie Chicken” Yet another masterwork. A groove so deep-fried that it practically falls off the edge of the barline. Gumbo that sounds as good as it tastes.

“Let It Roll” An energy unto its own. Hayward creates the perfect tension during the choruses with his snare accents and into the solos with his crash cymbals—then mercilessly drives the track into rock ’n’ roll oblivion.

Givin’ It Up For Richie

“Richie’s approach to the music is pretty much like, This is the last song I’m ever going to play, so he kills it. There’s no doubt in my mind that wherever his journey takes him, he will be in that moment with everything he has. To you, my friend, big love.”
—George Recile (Bob Dylan)

“There’s only one thing on earth that beats Richie Hayward’s drumming on Little Feat albums, and that’s Richie Hayward’s drumming on stage. He has everything: first and foremost the greatest feel imaginable, and then the chops and musical sensibility to match. Richie is one drummer who continually mystifies me. As I grew as a drummer and learned more about what I was trying to do, the bar he set rose continually too. The more I learned about drumming, the better he got. Lots of folks talk about the great drummers in rock history, but ask other musicians. Ask bassists and guitarists: Richie Hayward is in a class all by himself.”
—Steve Gorman (Black Crowes)

“Years ago, I spent time on the road as a drum tech. Many techs and sound engineers would request that signature ‘Richie Hayward snare sound.’ I found myself on tour buses at night with the old Walkman—really showing my age now—studying his sound for hours until sleep would take me away. The thing I didn’t realize was that his style soaked right into my soul. To this day, I smile so wide every time I hear him play. Now that he’s like my brother, I can really hear the wit, humor, and passion in those chops—he plays so cleverly. When you see him play, he’s immersed in the moment, eyes closed, entranced, and giving the feel of the song every ounce of that magic we all know is Richie. Now that I make his drums, he inspires me daily to push the envelope of what I know and what I can get away with. He may never really spend time thinking about this, but he has left such a beautiful mark on so many musicians—and not only drummers, just people who love his sound. He and I are really close. I love the man, and we hang around together whenever we can, but between you and me, I’ll always be a fan.”
—John Good, Drum Workshop senior executive vice president

“I first heard Richie back in the ’70s with Little Feat. Dixie Chicken was the joint that caught my attention. It has all the ingredients that I loved in drumming: an undeniable swing, sitting somewhere between a second-line funk groove and a Southern-rock beat. Richie and Feat made it a reality for all aspiring drummers to fuse jazz, rock, funk, folk, blues, New Orleans feels, and country…throwing it all into one big pot.”
—Randy Ciarlante (the Band, the Organiks)

“Richie Hayward’s feel is one of the best in rock ’n’ roll. From the moment he hits the downbeat on the bass drum, it makes you want to dance. I call his feel the ‘shooba-doo rock ’n’ roll boogie beat.’”
—Tony Leone (Ollabelle)

“His style has always been so unusual that it catches the ear no matter who else is playing or what else is being played. Richie is one of the most gifted drummers in the universe. More importantly, he’s a true human being, a friend, and a mensch.”
—Butch Dener, former manager of the Band