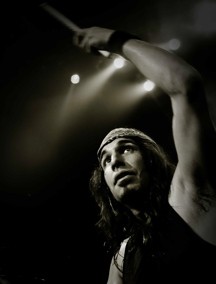 During a recent break from touring, recording, and writing with Billy Idol, multi-instrumentalist Brian Tichy rejoined Foreigner for their upcoming record and tour. Tichy also recently rediscovered his longtime obsession with getting into shape by using a speed bag. How, what, why? Let’s find out.

Man, I could talk all day about the speed bag!

What is a speed bag (or, in other parts of the world, a speedball)? And why is this question being asked for Modern Drummer online? Well, I’m talking about the pear-shaped, air-filled leather exercise “bag” that hangs from a swivel underneath a platform. It’s also known as a “drum”–see, this whole thing is already tying together!

A speed bag is most commonly associated with boxers, as a training tool to develop hand/eye coordination, punching speed, accuracy, and defense skills. (Keep those hands up!) But I also look at it as an insanely rhythmic and technical percussion instrument.

I’ve been hitting a speed bag since last September. I instantly became addicted to mastering its advanced techniques. This includes the use of the elbows, reverse punches, side punches, fist rolls, and the intensely groovy world of “punch drumming,” a term coined by “Speed Bag King” Alan Kahn, author of The Speed Bag Bible. But to get into those techniques at this point in the story would be like starting off a rock show with the drum solo. (Hey, wait, what would be so wrong with that?!)

Much as it is with drums, everybody wants to be able to punch a speed bag. But also like drums, the speed bag is loud and you need some space to set it up. As a kid, I got all psyched as I watched Rocky slam up a speed bag. And every time I’d see Ali, Tyson, or any boxer baggin’ it up, I’d feel I was missing out on something real cool.

So, after eight years of having a board and bag sit in my garage, their unassembled presence mocking me, I finally set ’em up. The motivation came from YouTube-ing “speed bag” last summer and nearly going into shock. Just watch Alan Kahn and the Speed Bag Skunk, and you’ll see what I mean. I had no idea of the advanced techniques of the speed bag. These guys and many others are doing things with the bag that, to me, makes it into its own art form. I can’t understand how this “boxing training tool” isn’t simply considered its own sport.

As a kid, I watched a friend’s mom hit the bag in her basement, and out of nowhere, she clocked it with her elbow. I always remembered that. Many years later, in a random gym on tour, there was a speed bag. I figured, I’m a drummer–this should be easy. Well, I was wrong. Then I tried again at another gym, and it wasn’t any better. A friend said I was probably hitting it wrong, using my knuckles instead of the side of the fist by the pinkie knuckle. He was sort of right but sort of wrong. It’s like anything else: You gotta practice and start slowly.

The built-in rhythm of the speed bag is triplets. To punch one time and allow three rebounds to happen before the next punch is probably the most natural motion of the bag, hence the triplet sound. This type of punch is commonly referred to as the front circle punch. It’s the single-stroke roll of the speed bag world, so it all starts there. Eventually it gets heavy and deep, kind of like the first time you watch Terry Bozzio, Buddy Rich, or Thomas Lang play.

I am actively pursuing getting the speed bag to be a part of my drumkit. So if you have the chance, check out some of the monsters on YouTube. I even put up a few clips of my own, where I tie the bag in to the world of drums. (Type in “speed bag grooves” and “speed bag truck.”) The clips include keeping time with a kick drum and a snare on a Bonham groove, punching along to Rush’s “YYZ,” and some double-baggin’ segments.

The crew that Foreigner currently has out with them are some great guys, and upon unloading the equipment truck, they turn it into the speed bag truck. So now I can get all “bagified” in any city in any country. One year ago, if someone had told me this, I would have said no way. But it’s all happening now! So go get a speed bag, punch-drum to your favorite records, and learn a new groove on the kit. Improvement and forward momentum breed happiness and ultimately increase your time above ground.

I will gladly respond to any and all questions regarding the art of the speed bag and the basics of getting started on one. You can send a message to www.myspace.com/briantichy, or you can leave a comment on any of my YouTube clips. Thanks. And bag on!