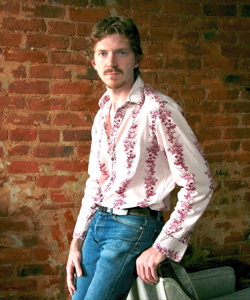 Hello, MD readers! My name is Tim Kuhl, and I’m a drummer and composer living in Brooklyn, NY. I’ve been playing drums for over fifteen years. I record and play in several rock bands in NYC, including the Izzys, the Junkman Band, C.Gibbs, Magnets For Teeth, Less Than Treason, and 22 Leroy. I’ve been fortunate to tour extensively throughout the U.S., Canada, U.K., Ireland, Korea, Japan, Guam, and the U.S. Marshall Islands, with a USO tour to boot. In addition to rock drumming, I compose and lead my own jazz group, the Tim Kuhl Group, which has released two records, Ghost (2008) and King (2009). I like to keep myself busy, so I also lead several other experimental avant-garde instrumental groups while working as a sideman on the NYC jazz scene. And as a day player, I’ve done numerous theater pit musical performances.

Music for me has been a way of life and part of my family upbringing. My parents didn’t play musical instruments, but they were big fans of music. I come from a large family, including four brothers. Like me, two of my brothers, Mike and JC Kuhl, are very busy professional musicians. Within the rest of our family, there are a large number of my cousins and family members who are talented musicians and music teachers.

I’ve been inspired by so many things that are reflected in how I play the drums–listening to many various styles of music, watching films, and living life experiences. I plan on continuing to live in NYC, release more recordings of my own and with other bands and friends, and doing just about anything else that comes my way.

Thank you for reading and for your support.

For more on Tim Kuhl, go to www.myspace.com/timkuhlgroup or www.sonicbids.com/TimKuhl.