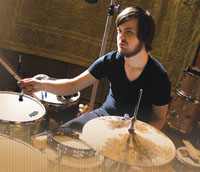 Panic At The Disco might be “all the rage” right now, but drummer Spencer Smith divulges that the band routinely gets inspiration from rock’s distant past. While touring behind their debut album, Spencer says, they experienced a creative epiphany listening to and falling in love with classic albums by The Beatles, The Who, and The Zombies. “We became huge fans of these bands,” shares Smith. “Even though this music was recorded thirty or forty years ago, it still sounded more interesting, creative, and fresh to us than anything we were hearing on the radio.”

The group’s immersion in the music of these seminal rock bands shows up all over their new CD, Pretty.Odd. The album channels an authentic ’60s pop/rock sound for a lush, aural homage so full of bells and whistles that it’s likely to leave even the casual listener’s head spinning.

Spencer achieved Pretty.Odd’s retro drum sound by playing the same vintage gear used on the original recordings, as well as emulating studio techniques employed to get those specific sounds. For the chorus of “Behind The Sea,” for instance, Smith double-tracked the drums, playing the identical part on each of his two vintage kits, one Gretsch (room miked) and one Ludwig (close miked with four microphones), each stripped down to a kick, snare, and floor tom.

While recording Pretty.Odd, Spencer also became more conscious of his role as the drummer within these songs. “Usually it’s apparent whether percussion or drums are going to work easily within a song,” he asserts, adding that he doesn’t feel every measure of every song has to have some sort of drum aspect. “I’ve been collecting different shakers and tambourines and have started using more hand percussion on tour as well, to change things up. The Beatles were the best example drum-wise of how drums or percussion should be used only to enhance a part of the song. If the drums aren’t making that part better, then they’re not on the track. That’s my philosophy.”