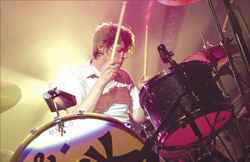 While The Black Keys’ latest offering, Attack & Release, retains much of the DIY ethos the Akron, Ohio duo has honed since its early days, it’s clear that drummer Patrick Carney and singer/guitarist Dan Auerbach wanted to mix it up for this release. Specifically, the band took some different approaches to getting sounds.

Carney, in particular, had specific ideas for his sound. “Off the bat, I knew I wanted two completely different drum sounds,” he explains. “So I had one of the Bonham reissue kits and I set that up in a live room. And then I knew I wanted a kind of ’70s dead sound too, so I did the whole ‘towels on the drums’ thing.”

The Keys also brought in an outside producer in the person of Danger Mouse, who became known for his Internet-leaked Jay-Z/Beatles mash-up, Grey Album, but attained widespread popularity as the driving force behind Gnarls Barkley.

“He was pretty picky about finding the right tempos for songs,” Carney says. “Then there’s a song like ‘Psychotic Girl,’ and another song called ‘Remember When (Side A),’ where we had a noise percussion loop that Danger Mouse made, and I overdubbed three complete passes of drums. He went through every pass and aligned everything just how he wanted, with real drums and fake drums. Normally, it’s all live.”

Carney will showcase his energetic backbeat as the band tours Europe and North America for the remainder of the year. His live setup incorporates triggers, vintage drum machines, looping devices, and other electronics into his sound, a move inspired by The Jon Spencer Blues Explosion. “I remember seeing them when I was sixteen, and drummer Russell Simins had an effect on his floor tom,” Carney recalls. “It was the coolest thing.”