My band Reckless Kelly have been trying to get me to blog on our site forever and as soon as I heard that Modern Drummer was interested in me doing a blog for them, I jumped right on it. Sorry guys—

I’m Jay Nazz and I’ve been playing drums in Reckless Kelly for over twelve years. I’m fortunate enough to play with incredible musicians who I also love to hang out with. I’m sure a lot of you out there already know that’s not always the case. Over the years we have toured relentlessly and have recorded seven albums including our newest release, Bullet Proof, which was recorded at Willie Nelson’s studio in Texas. We started out in a 1979 Brown Suburban with two window rollers that you would have to pull off and hand to the next guy if it started to rain. It’s been a crazy ride and we have worked very hard for everything we have today.

I started playing drums when I was thirteen years old with my dad who sang and played acoustic guitar. It was so cool back in 7th grade showing up after a four-hour. gig the night before and having enough money to buy all my friends at the lunch table ice cream sandwiches. I played throughout high school but even though I brought my drums with me to college, I lost interest and I guess I wanted a break from it all. Before my last semester of college I decided to take a road trip from Rhode Island to Bend, Oregon to see the country and have a last hurrah with my friends. I decided to take my drums, but still wasn’t sure if I would actually play them again. We decided to go to a bar one night, and it happened to be an open mic night. This band walks in and I quickly notice they didn’t have a drummer. They were very receptive to my offer to sit in. Three songs later the bass player came up to me and tells me their drummer quit that day and invited me to play drums with them for the summer. I said, “Why not!”

I didn’t plan on enjoying it as much as I did. The chemistry was great, and we were an all-for-one-band. So at the end of the summer they asked me to move and join the band. I went home to my folks’ house, and one night I finally decided I couldn’t put it off any longer and began to tell my parents the change I was about to make. My mom was cooking dinner and I simply told her, “Shut off the stove, you’re not going to be hungry after this.” A week later I was driving to my new home in Austin, Texas. I remember getting there and feeling awkward when people would ask what I did and I would say, “I’m a musician.” I mean, a couple of weeks prior I was still a psychology major. I felt behind and I just didn’t know if I could hang as a professional musician. We started playing these festivals with great drummers like Brady Blade and Chris Layton and I felt like I was in over my head. I was reading an interview in Modern Drummer many years ago with Adrian Young from No Doubt and he was talking about his first time in the studio and how difficult it was and how he felt there were times when he just didn’t think he could pull it off. He also talked about how he decided to stick with it no matter what. That had such an impression on me–that someone who I thought played so great could have felt that way. Since then we have played with some really great bands, done all kinds of festivals, played The national anthem for MLB, NFL, and NBA, made videos for CMT and VH-1 Country, and get to do it all riding around in a big old tour bus. I’m very grateful.

I guess my message here is for the guys getting ready to make that decision and are trying to figure out if they have what it takes. I think to certain degrees we all go through the difficult process of making that commitment. I believe my drumming career is a constant work in progress and it allows me to keep growing as a player and not get discouraged because I wasn’t born with the last name Bonham—. I admire so many players that I see constantly working harder and sacrificing whatever it takes to play their instrument for a living. To me, that’s the definition of success. It’s all heart! So stay humble and remember as you’re coming up to treat everyone with respect and encouragement–even lead singers—. Just kidding.

I play Yamaha Drums, Zildjian cymbals, Remo heads, and use Vic Firth sticks (Thanks for making such awesome sticks!).

For more with Jay visit, www.recklesskelly.com

Aaron Comess: On the Re-Formed Spin Doctors, His Early Influences, and His Many Outside Projects 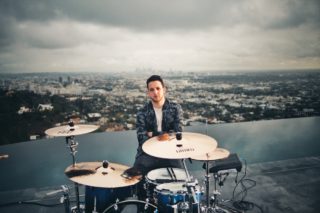 On the Beat with Pete Nappi of Ocean Park Standoff: Talks Producing and Drumming Roots