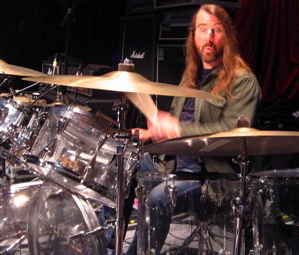 Blind Melon’s Glen Graham talks to MD Online about the band’s dramatic resurrection, and the release of their first album in thirteen years, For My Friends.

Blind Melon signed to Capitol records in 1991, and in two short years they’d gone platinum with the help of the MTV video for their smash single “No Rain.” Original lead singer Shannon Hoon passed away in 1995, at the height of the group’s rise to fame. Drummer Glen Graham says he had to stop playing at that point—and subsequently didn’t play music for almost the next ten years. “It sounds kind of pathetic, I suppose, but I just lost interest,” admits Glen today. “But to go from that level…to realize you were doing exactly what you wanted to do, and that things were going well, and then to you lose your friend and everything else…it was very difficult.”

Glen eventually did start playing again, after friends persuaded him to get on with his life. Recently, the band’s original lineup—plus new singer Travis Warren—has been playing dates in the US to promote For My Friends, and so far fan response has been positive. “I would say ninety percent of the shows are sold out,” says Graham, “and people are singing the words to at least half the songs. Some people are even singing the words to our new songs, which is kind of amazing to me.” We spoke with Glen while he was at home taking a short break from the road.

I’m digging the new record; were the tracks recorded live?
Thank you! Yes, there are a few overdubs, but it was mostly live.

What kit did you use?
I used a Zickos clear acrylic kit on everything except “For My Friends,” “Make A Difference,” and “Harmful Belly.” We did those first, and I used a cobbled together kit of old Ludwigs and Slingerlands.

The new album sounds more melodic than your previous records.
We have a different singer now and Travis is coming from a completely different place. He was a huge fan of the band growing up, and he’s ten years younger than us, so I guess we heavily influenced him and his style.

It also sounds more “commercial.”
Well, let me ask you, does it sound like it was played to a click or not?

To me it sounds like it was played to a click.
Your right! It definitely was. And I never used a metronome in my life—to practice with or to record to.

Maybe that’s why some people might think it sounds a little slick.
I can understand that point of view, certainly. On our first record I never really realized the importance, or the value, of a metronome. The second record was better as far as the time went, and the third was just overdubs on existing tracks. So this time I just thought, What the hell, if I use a click this time at least there will be no way to go back and go, Oh why did I do that? I felt like I kept it pretty fluid considering it was my first time with a click.

Definitely. How old were you when the first record came out?
Early twenties. We were very lucky.

Speaking of, what advice would you offer upcoming drummers that want to get into the music business?
Well, as far as trying to do it professionally, I would say this is the greatest time in the history of the world to do it all yourself. With MySpace, the Internet, etc., you can get just as much exposure as a lot of the bands that are or were on major labels. As far as a kid trying to figure out how to get in a band or whatever, listen to good people. I would say to every kid, listen to jazz and go back and listen to Hal Blaine and Jim Gordon. Learn how to play to good songs. Anybody can do it. Everybody’s got Pro Tools or some similar thing, and you can do it at your house.

Do you have a home studio?
Yes. It’s nothing fantastic, but it’s adequate. I have like the most ancient technique imaginable when it comes to miking drums. I used to have a bunch of real cool vintage gear, including a Neve board, but I got rid of all of that a long time ago. Now I just use a stereo mic over the kit, a kick mic, and a snare mic, and that’s it. I’m using the most basic gear—a Mackie board run directly into the computer through an interface, and it sounds fine. I’m not trying to make records in my basement; I’m just trying to get ideas down. These days all you need is a laptop, an inbox, and a couple mics, and that’s about it. It’s about mic’ placement and tuning the drums properly.