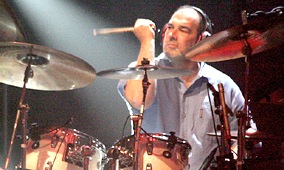 Hello, MD bloggers! I’m best known for being “Weird Al” Yankovic’s drummer, and I’m quite proud of my lengthy association with him. I did my first recording with Al in late 1980, and twelve albums later, there are no signs of slowing down. While many drummers are known for their own style, I get to be a lot of different drummers and play a lot of styles. Not only has this expanded my musical vocabulary, it‘s also great fun for me. There’s not another gig like mine, or another drummer who does exactly what I do, and I still feel fortunate to have landed in that chair after a chance meeting with Al almost twenty-eight years ago.

We’re on the road again this summer for a nine-week tour across North America, which is mercifully short compared to the six months we performed in 2007! It’s a family-friendly show, but at the same time not a kiddy show, and perish the thought that Al is a stand-up comedian or plays accordion all night. It’s a full-on rock show–albeit with intentionally funny lyrics and the occasional costume change–officially billed as “a multimedia rock and comedy extravaganza.” If I may be so modest, the show is really great,  and I’m still having a great time!

For more on John Bermuda Schwartz, go to www.bermudaschwartz.com or www.weirdal.com.