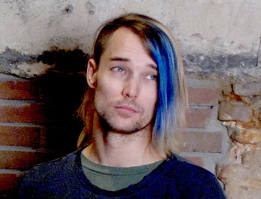 Hi. Steve Mehlman reporting from Cleveland. I’ve been playing drums for—a long time. I’ve played a million shows with a ton of different bands, like Pere Ubu, Rocket From the Tombs, and yes, even some cover bands–they pay. I’m on a bunch of releases–most recently the Pere Ubu album Why I Hate Women and the last Rocket From The Tombs album, Rocket Redux (both out on smogveil.com) –plus a slew of albums that you couldn’t find if you wanted to.

I’m not what you’d call a real technical drummer. I took lessons for a couple years way back in the day, and what I took from that was mostly how to read drum music for school–orchestra, wind ensemble, marching band, and all that.

I’m told that I’m a basher— and—well, I do prefer to beat the f*** out of my drums. Most of my swings start behind my head, and I aim for the floor, shaft on the edge of cymbals that are mounted too tight so that they don’t flop around too much when I’m playing fast. I bend way the hell over and lean into every hit (well, depending on which band we’re talking about), and I sometimes refer to myself as a Cro-Magnon drummer. You’ve seen the evolutionary-chain picture where it goes from monkey to man in like six easy steps? I figure I’m somewhere around the third or fourth step. You know, a little primal. BUT, I can mix it up.

I don’t really like to talk shop (really kinda can’t stand it), but I know what I like–my gear and nothing else will quite do. But whatever, I get stuck with a lot of rental gear. I never spent a lot of time practicing (which is why there are twelve-year-olds who just crush me). Rudiments? Blech. Hate it. Wish I liked doing it, but no.

Tuning? That’s for drum techs—God, I wish I had a drum tech. So, yeah, learn to tune your drums, so you can get a job as a drum tech.

And I can’t even guess how many times my eighteen-year-old kit has been toppled–singer over the top, kicked thru plexi-glass shields, dropped down stairs, rained on, fell out of the truck, slammed to the ground in fits of rage, etc.–but it’d be easy to tell you how many times I’ve cleaned them: I’m pretty sure there’s some eighteen-year-old spit, sweat, and beer on there. Ugh. I think I might go clean my drums.

I ain’t one of those guys who can talk endlessly about all the greats of drumming and their attributes, and who’s better than who, and why, and blah-f***ing-blah. I’m not what you’d call a history buff. I don’t think John Bonham was the best drummer in the world; that’s Stewart Copeland. Well, sure, I suppose there are better guys, but I loves me some Stewart Copeland. There’s a huge list of people who make Neil Peart and Keith Moon look like chumps–I ain’t sayin’ I’m one of ’em, I’m just sayin’. But so what? Most famous drummer in the world? Nowadays, that’s probably the lovely Meg White. So, like whomever you want, but there’s always some little kid who’s better than your heroes.

Anyway, all my opinions aside–time to pimp my wares. I have a Yamaha Rock Tour Custom four-piece kit–22″ kick, 6×14 (or 61/2″ or 51/2″), 12″ rack (sometimes 13″ instead), and 16″ floor (sometimes my 18″ CB700 instead). I generally only play Zildjian cymbals, but I’ll use anything I find that’s heavy and sounds good. I use a 14″ Quick Beat bottom with a bottom New Beat on top for my hats, a 20″ A Custom medium ride (sometimes as the crash, though they all get crashed), and a 20″ K Custom Hybrid ride. (Love the sound, but it’s not that heavy.) Black leather Pork Pie throne–love it. Finally got some DW5000 pedals. Mostly Tama hardware. LOW Ludwig snare stand. Pro-Mark 808 sticks. Heads are generally Remo Pinstripes or Evans Hydraulics, but sometimes Aquarians. I try to try new stuff, but that gets kind of expensive.

Go see Pere Ubu (the band I’ve been in for like a dozen years, often described as old, weird, fat, scary, annoying, mean, etc.–wait, did I say awesome?). My singer tells me that we are the greatest rock band in the world. Here are some upcoming dates:

Um, and go see Roué (compare to, say, Sonic Youth and The Jesus Lizard–pounding and pretty, and sometimes pretty ugly, oh, and really loud) and Liquid (kinda power-poppy, heavy rock-ish, with huge—everything). Come say hi. And while I’m pimping my bands, I don’t do MySpace, but Roué (www.myspace.com/roue) and Liquid (www.myspace.com/liquidsuperstars and www.myspace.com/myhitmachine) do. And Pere Ubu’s got a Web site, too: www.ubuprojex.net.