Hello, everybody, my name is Mike Najarian and I play in the band State Radio from Boston, Massachusetts. We just recorded an album at Real World Studios in Box, England with the infamous mastermind producer Tchad Blake, and I would like to tell you all a little about that experience. The first interaction I had with Tchad was asking him over email if we needed a drum tech for the sessions, because we didn’t have one at the time. He called up our lead singer, Chetro Stokes, and opened the conversation with, “Now I am really worried.” Chetro thought Tchad was going to rip into us about not having a drum tech, but instead he said, “How the hell does your drummer even play his drums if he can’t tune them? Further, just to get on the same page, I don’t give a shit how the drums are tuned.” And he really didn’t, which worked out well because I am not the greatest tuner of drums.

Tchad’s approach to recording was not about precision or perfection but about getting creative. We didn’t use a metronome at all for the sessions, we kept mistakes such as missed snare hits or accidental rimshots, and we kept full drum takes for many songs, instead of cutting and pasting, as Tchad believed in “the integrity of a take.” At first this method sort of made me nervous, but Tchad assured me that music was supposed to speed up and slow down and not be perfect. As the sessions continued it was obvious that Tchad had an uncanny ability to spot a good drum take once it had occurred, and we rarely took more than nine or ten takes per song. It became a running joke in the studio that I would not be getting a call from Modern Drummer because we were keeping mistakes and tempo changes. I guess we were wrong–or just have a really good publicist.

Tchad also truly believed you could get great sounds from anything you record with. Frequently he would ask me to “detune” my drums, or completely loosen one lug on the drum and then completely tighten another. When asked which lugs to use he would say, “Take your pick, surprise me,” which completely boggled my mind. Sometimes the drums would sound like paper in the booth but unbelievably full and rich in the control room. He would often run distortion (sans-amp) on the snare drum, and he’d run overhead mics through a didgeridoo through an amplifier—and so on and so forth. He is known for binaural recording, which meant that we had an overhead mic in the shape of a human head staring at me throughout the sessions. This dummy head, named Gogoli (which meant kind spirit or something like that), simulated what a human head would hear in the room and actually spoke to our bassist Chuck Fay during a late night he had alone with Gogoli on acid at the beginning of the sessions. Gogoli apparently said, “Don’t rely on your heart, but play with some f’ing balls.” I would like to think this comment shaped the album and that Year Of The Crow is a ballsy record full of Gogoli’s spirit.

Photo by Laura Barisonzi. For more on State Radio, go to www.myspace.com/stateradio. 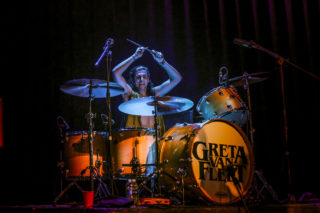 On The Beat with Danny Wagner of Greta Van Fleet: Talks Influences, Songwriting, and Music Muscle