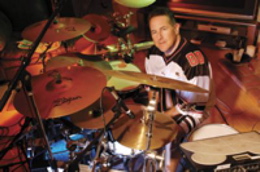 After spending over two decades performing in progressive metal acts such as Warlord and Fates Warning, Mark Zonder could be pigeonholed as a one-trick slammer. But if the recent self-titled release of his newest band Slavior is any indication, Zonder’s ready to dispel any classifications set before him.

Credit the fact that Zonder’s finally in the driver’s seat. While most drummers are on the receiving end of the songwriting process–often with guitarists or vocalists dictating the initial form of songs–most of Slavior’s material starts from behind the kit. “The whole premise of this band was to base the pieces on drum patterns I’d been working on and recording,” he says. “I wanted to get a unique sound that was also very rhythmic. As you know, it’s sometimes tough to jam that into someone else’s song or part.”

Linking up with guitarist Wayne Findlay (from the Michael Schenker Group) and vocalist Gregg Analla was key to establishing Slavior’s success. Zonder moved south to San Diego and began tracking in his home studio, which is crammed full of gear he’s accumulated throughout the years. “I’m basically like a kid in a candy store,” Zonder says of his new place. “It’s an amazingly creative outlet for me.”