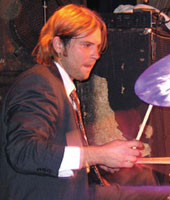 Tyler Greenwell was climbing onto a hot seat when he joined Colonel Bruce Hampton & The Codetalkers six years ago. “You’re haunted by the drum chair,” he says. “The ghosts of the guys who have been here include Sonny Emory, Jeff Sipe (Apt. Q-258), and David Earle Johnson. Of course, I came in and was overplaying like a jerk–no musicality whatsoever, with fills every four bars. So for the first three years, I was only allowed to play with a bass drum, a snare, a hi-hat, and a ride. It was the best lesson I ever had. I used to ask Bruce, ‘Why can’t I have toms?’ He’d say, ‘Toms are for cowards.’”

Colonel Bruce is no longer touring, but the band–which also includes guitarist/vocalist Bobby Lee Rodgers and bassist Ted Pecchio–plays on with his blessing. “It was boot camp with Bruce,” Greenwell says. “He’s good about taking you in and then kicking your butt, destroying your ego and causing sleep, food, and financial deprivation. [laughs] Hopefully you make it out alive. If you do, you’re a stronger, better, more well-rounded player and person.”

Greenwell grew up in Pensacola, Florida listening to Bad Brains, Zeppelin, and a lot of punk rock. He still enjoys the high-energy stuff, and at some point in every Codetalkers show the players hit that extra gear. Greenwell kicks into a breakneck double-time, sweating but smiling because his playing is solid from the feet up. “It’s controlled chaos,” he says. “It’s nothing worked out. It’s an energy thing, not a chops thing. You get that telepathy going and want to push the guys to their maximum potential.”