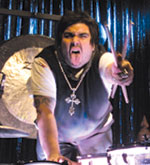 When the members of Papa Roach chose to live for several months in LA’s historic Paramour Mansion while recording their band’s fifth album, drummer Dave Buckner got a bit more creative inspiration than he expected. “The Paramour is definitely haunted,” Buckner explains. “Being a spiritually open person, I had quite a few metaphysical, paranormal experiences on that property. I don’t know if that specifically had any affect on my drumming on this record. But the physical aspects of the house itself and the rooms in which we recorded affected my writing and playing.”

The majority of recording for The Paramour Sessions took place in the mansion’s acoustically favorable grand ballroom. “Every note you hit in that room just lingers on forever,” says Dave. “One kick drum hit or snare crack will sustain for a whole bar. Because of that, we all started playing a bit more simply and sometimes a little slower. We really tried to focus on the small spaces in the music and the placements of each part.

“I’m a pretty straightforward drummer anyway,” Buckner continues. “But I really just got down to four-on-the-floor, bare bones playing–like Phil Rudd, almost. That’s where I felt I needed to be. I’m not the kind of drummer who takes a measure of music and subdivides every beat to see how many different ways I can split up the time. My goal with my drumming is to help convey the emotion of the music and to, literally, speak emotionally with my drums. That’s the only way I ever think about the way I play.”