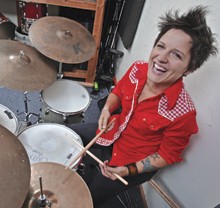 The twenty-six-year-old drummer understands the musical adjustment between those gigs. “With jazz,” Allison says, “there’s a certain way you play ahead of the beat a little. With pop, especially with Natalie’s band, it’s a different feeling. It’s minimal. Rachel has said, ‘When playing pop you have to put all of your soul into one note instead of ten.’ You have to make that one note count. And you can’t miss the snare on the backbeat when you’re playing for 10,000 people.”

Recording On the Milky Way Express was something of a ljazzabor of love, says Miller, who was excited over the chance to do a tribute to one of her favorite composers – especially as a trio. “It kind of takes a lot of nerve to do a trio record of Wayne’s music,” the drummer says. “But Rachel’s got a lot of nerve.”