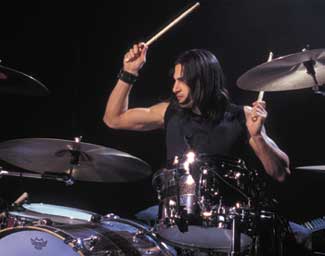 Audioslave’s Brad Wilk had plenty to say for MD’s April ’03 cover story. But there’s more! Check out the hard-hitting drummer’s comments on topics ranging from Audioslave’s incredible first video to the surprising similarities between The Police and Rage Against The Machine.

Brad on the leftover material from the Audioslave sessions:

I’m not sure if they’re gonna wind up on another record or if they’ll end up as B-sides or something like that. But it’s really nice to have a pool of songs in your back pocket in case you need them. In Rage, it was really hard for us to get eleven or twelve songs that we all agreed on.

Brad on making Audioslave’s “Cochise” video, where fireworks provide all the lighting:

I have burn marks on my back. I have cymbals that are just torched from flame balls falling on them. It was insane. I knew that we were in for it. We were all a little bit nervous going into it, because when you’re blowing that much shit up you only get a couple times to do it. And both times we were goin’ for it.

The first idea for the video was that we’re playing the song and all of a sudden bullets are flying at us and people are shooting at us. By the end of the song, you see the bullets penetrating our skin, and basically at the end of the video we’re all dead. We’re sitting there on the phone listening to [“Cochise” video director Mark Romanek] say this, and we’re all going, “Yeah, that’s great, Mark. And no one will ever see it.” While the thought of it was really cool – I’m just demented like that – we passed on it. His second idea was to be lit by nothing but fireworks.

I think Rage Against The Machine’s [self-titled] first record was my leanest, even more so than Audioslave. I started off on a three-piece kit: bass, snare, and floor tom. And it was really simplified – you couldn’t really hear any of the stuff that was going on between the beats. It was almost like that stuff was taken out during mixing. I wasn’t represented the way I wanted to be on that record. I was a young chicken and I didn’t speak up enough. While I think it’s a great record, it wasn’t what I had in mind for drum sounds. It really lacked breath.

Brad on his left foot:

My hi-hat foot is strange and different, and I don’t use it in a traditional way. I think that using your hi-hat almost as a percussion piece rather than something that’s constantly in the same place is cool and interesting. I would say that eighty percent of the time when I’m on my ride or riding on a crash, there’s some kind of strange hi-hat coordination going on. It’s not always on 1, 2, 3, and 4. In a bar it may just be one accent, depending on the groove – on the “&” of 3, maybe. Or on the “&” of 3 and on 4, so they’re butted right up to each other.

Brad on his Audioslave bass drum and on the virtues of giant 26″ kicks:

In the studio I used a 22″ Gretsch. It was an extended kick drum; I don’t even remember the size. You know, if they’re round and they sound great, I don’t care about the dimensions. [laughs] I just put it up and hear what it sounds like.
Those huge kicks are awesome. I used one on the last song on Evil Empire, “Year Of Tha Boomerang.” It’s so much fun. It’s weird, man, playing such a big thing – it’s sort of like jumping on a trampoline. It almost seems like your whole leg becomes part of the drum. [laughs]

Brad on copping licks and grooves from other records:

I don’t tend to listen to records and think, “Hey, that beat would be great for one of our songs,” though I have done that. I did that with “Vietnow” on [Rage Against The Machine’s] Evil Empire. I was going to rehearsal that day, and Queen’s “Another One Bites The Dust” was on the radio. I just straight ripped off that snare-kick thing and kind of looped it. But I don’t really do that too often, I usually just work it out in my head.

Brad on how Rage and The Police blended different styles in a similar way:

I never realized how similar the philosophies of The Police and Rage Against The Machine were. Stewart Copeland would take these reggae-style verses that were heavily emphasizing the 3, and then in the choruses he would kind of switch it over to the rock 4/4, and it was really cool and interesting. Rage Against The Machine took hip-hop styles and mixed that with hard-rocking choruses quite a bit. So I thought it was a similar philosophy in that way.