Feel-good party music is what Southside Johnny & The Asbury Jukes have always been about. And for the past two years, Louie Appel has been a very big part of bringing that feel-good groove to audiences around the world. “The gig’s a lot of fun,” Appel says. “Plus these guys are great. It’s been a cool gig. Last year we toured Europe opening for Bon Jovi, and we’re going back again this year. And Johnny amazes me; he’s been doing this since 1974.”

Recently the revised Jukes recorded the CD, Going To Jukesville. “This new recording was very old-school, very traditional,” Louie explains. “We cut all the tracks live with the rhythm section, without a click track, with Johnny right there in the middle singing. The horns were overdubbed later. We recorded all the songs in about a week and a half.” When Louie’s not touring with Southside Johhny, you can find him recording and playing with The Demolition String Band. “Their CD, Pulling Up Atlantis, was a little different for me. It’s a rock-n-bluegrass record.”

*We were very saddened to learn of Louie’s recent passing. Look for a full In Memoriam in an upcoming issue of Modern Drummer. For more about Louie’s career, go to his Web site: www.louieappel.com.

What You Need to Know About…Effects Cymbals 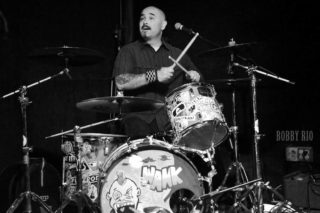 Spider of Wank in On The Beat