A couple of years ago Steven Gillis got a call from his old drummer friend Matt Walker, who had been playing in Filter. Walker told him to go buy Filter’s Short Bus and learn it, because he was going to get the call within twenty-four hours. Eighteen months later, Filter’s Richard Patrick showed up at a weekly jazz improv gig Steven was playing and asked him to join the band. As the man once sang, what a long strange trip it’s been.

Gillis, for his part, wasn’t sitting by the phone waiting. Instead he was out there playing any gig he could get, no matter the style or pay. “I felt like that was when I really learned how to be a musician,” he says, “just by playing all night long for $50.” Though Gillis had been playing in jazz, blues, and rock bands, the Filter gig didn’t phase him one bit. “I was a huge Ministry fan back in the day,” he insists. “And I feel like I can jump into any situation and really sink my teeth into it.”

While Filter’s musical style involves sequencing, Gillis was asked to come in and lay down live drums on every song for their recent release, Title Of Record. More often than not, he says he had to tone his inclinations down. “When Richard presented me with certain tunes, I’d be pumped up and I would know how I wanted to approach them. The reality of it was that I had to pull back and play simpler, which is totally cool.” Then came the song “It’s Gonna Kill Me,” where the drummer had the chance to play out. “The first take I did was “The’ take, with me just going nuts. I was playing way over the bar line and reacting to Richard, who was screaming his vocals. I needed to do something, and I reacted.”

Steven’s ability to play over the barline and adapt to changing moods gives Filter new depth. Gillis is not shy about guessing how he got this gig. “I think Richard asked me to be the drummer in Filter because of all the experiences I’ve had,” he says. “He didn’t see me playing with a metal or industrial band; I was playing with a ten-piece improv band. But he thought that my style, or my aggressiveness, or whatever it was that I brought to the plate, was what he wanted in Filter.” 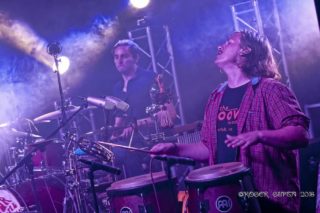