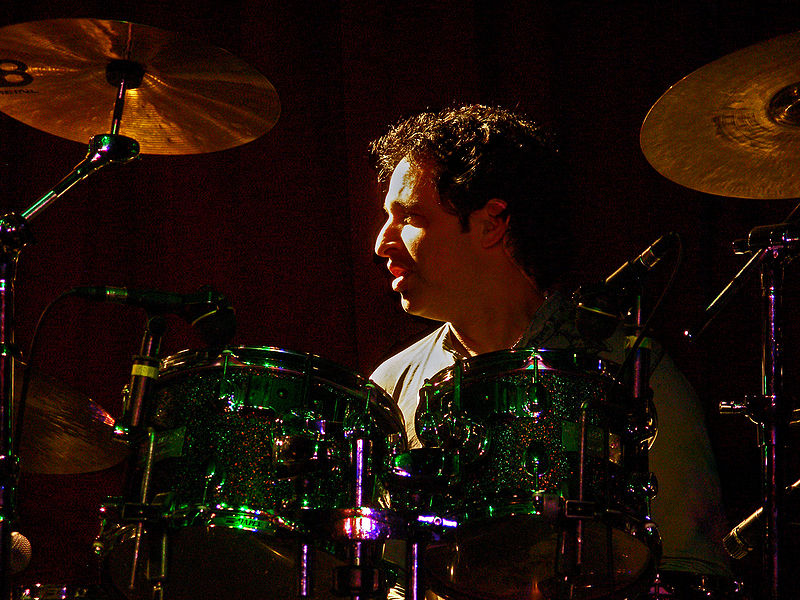 Phil Collins began his successful musical career as the exciting young drummer for an obscure prog band from England called Genesis. He eventually worked his way out from behind the drumkit to center stage as the lead vocalist. As lead vocalist for Genesis, Collins matured as a singer and songwriter as the group developed into a multi-million-selling pop-rock group. Eventually Collins ventured off on his own as a solo artist and became an international superstar. So what does this have to do with prog-rock drummer Nick D’Virgilio, besides the fact that he was chosen to record drum tracks for Genesis’s1997 album, Calling All Stations, once Phil Collins left the band

Over the past several years one group has been mentioned time and again as the most melodic and listener-friendly of all prog bands on today’s scene. That group is America’s own Spock’s Beard, and their drummer is Nick D’Virgilio. Nick’s solid pop groove, nearly perfect technique, and quality backing vocals have helped propel Spock’s Beard to international recognition as one of today’s top prog bands. His fine playing has lead the drummer to other work too, including artists like pop stars Tears For Fears and fusion-head Mike Keneally.

Now D’Virgilio is itching to step out front and show the world that he too can sing, write a good song, and keep the groove in the pocket (just like his main inspiration, Phil Collins). With his brand-new solo debut, Karma (Inside Out Music America), Nick is ready to take center stage.

MD: Are you pursuing a solo career with your new release, or is this a personal goal brought to fruition?

Nick: Both. I’ve always wanted to do this, but for a host of different reasons I didn’t pursue it earlier in my career. The biggest reason was that I didn’t feel that my songwriting capabilities were where I wanted them to be. I’ve always been a fan of great music, and I always judged my songwriting against the bands that I respected and listened to. My songs didn’t live up to any of them.

I’ve been singing since I was a little kid, and I’ve always been jealous of guitar players, because I’ve always wanted to be out in front of the drumset. It’s funny because I’ve been playing drums all my life. I don’t know why I picked drums as my main instrument.

I finally put some demos of my music together, and the guys at the Inside Out label in Germany said that they would set up a budget for me and release it if I wanted to put out a solo record. That was the big push I needed to finally go for it. I really do want to pursue a solo career. I want to sing as much as possible and get out from behind the drumkit.

MD: Does this solo effort allow you to do the things that you would normally not get to do in Spock’s Beard?

MD: We haven’t talked about your experience of recording with Genesis. How the heck did that come about?

Nick: I heard from a few friends that Genesis was having auditions for the drum chair because Phil was leaving the band. At the time, I was touring with Tears For Fears and happened to be in London when I heard the news, so I found out where Genesis’s management company was located and went there with a Spock’s Beard CD, The Light, and told them I was playing with Tears For Fears the next night. I invited them to the show so they could see me play and said that if there was any chance in the world that I could get an audition, I would love one.

Well, I went through the whole TFF tour not knowing if they came to the gig or checked out my playing. Then I think it was three months after that when I got a call from Genesis’s producer, Nick Davis, asking me if I could send a DAT with some more music so they could hear some different things. I did that, and they called back a few weeks later and said they wanted me to come to their studio, The Farm, for an audition. Needless to say, I was freaking out. Genesis was my favorite band in the world when I was growing up. I played to their records every day.

Anyway, I went on a short tour with Jonatha Brooke, and right from there I flew to England and did the audition. I played to all of the tracks they had put together for the new record, and they recorded what I played to hear roughly what I might do. I was there for three days, and then I flew home. I then got another call from Nick Davis a little while later, saying they wanted me back to do the record. As you might imagine, I was a very happy guy. I went back and recorded for about a week and that was that.

About being in the studio with those guys, well, it was amazing. They were very sweet. I almost didn’t believe that I was on a Genesis record until I saw the finished copy. As I’ve said, Phil was my favorite drummer growing up, and to be on a Genesis record was exciting, fun, strange, and a little unbelievable. I mean, that was his band for twenty years, and there I was, doing his job. It was bizzare for me, but very satisfying.

MD: Getting back to your project, what would you like the listeners to come away with?