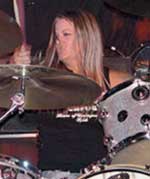 With the same intensity that linebackers smash the head of Brett Favre, Skillet’s Lori Peters attacks her set. “Being a drummer is a lot like being an athlete,” Peters agrees. “It takes the same amount of dedication and discipline. You have to have endurance in both arenas.”

Known as a very aggressive hitter, the Wisconsin born Peters’ hair-flailing stage presence is refreshing and not all that common for the gender. “I always had to fight my way to get the good parts in high school band,” she says. “They always wanted to stick the girls on the bells. Playing in a heavy band like Skillet is cool; I guess people dig seeing chick rockers.”

Skillet’s sound comprises the aggression of Nine Inch Nails with the melody of Fuel, allowing the throaty vocals of bassist John Cooper to lead the charge. The band’s latest disc, Collide, has put a stamp on the modern rock charts. “Over the past six years Skillet has evolved from a more industrial sound,” Peters explains. “I’m really excited about Collide because it’s like the hard rock I grew up with on MTV. This disc has heavy guitars and heavy drums and very little electronic stuff.”