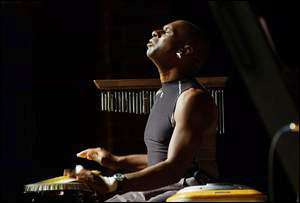 Through his work with jazz diva Cassandra Wilson, Jeff Haynes has evolved into more than “just” a percussionist. Stints with Pat Metheny, Peabo Bryson, Dionne Farris, Harry Belafonte, Lizz Wright, and others have left their mark on Haynes. But his hand drum/drumkit hybrid has evolved over the course of his long musical relationship with Wilson, where, as kit drummers have come and gone, Haynes has consistently been called on for rhythmic stimulation, support, and color. “I understand Cassandra’s dynamic,” he insists. “I’ve worked with a lot of vocalists, and you have to learn their body movements, how they feel, how they work onstage, and when they need the dynamic to go down.”

Haynes met Wilson in the early ’80s, soon after she’d moved to New York from New Orleans. The percussionist appears on eight of Wilson’s CDs, beginning with 1991’s After The Beginning Again and continuing through 2003’s Glamoured.

On tour, Wilson brings only an acoustic guitarist, a bassist, and Haynes. “I actually like that combination,” he admits. “It means that I am the pulse, and I really feel comfortable in that chair. You can also get more dynamic with that kind of situation, and you can use more textures.”

Haynes drives the groove with his right hand on a djembe, adding accents with his left foot on a kick drum. “With the djembe, it’s like two different kinds of kicks,” he explains. “The djembe has its own sound and the kick drum has its own sound. When I use the two together for accents, it creates this kind of texturized low-end atmosphere that works well.”

Haynes’ upcoming solo CD will showcase the variety of music he’s played: African, Brazilian, Latin, Cuban, straight-ahead jazz, and smooth jazz. “I play from my heart and soul,” he says. “I want to do whatever is necessary for the music. It’s really a passionate feeling when you get to a level of playing by not playing so much. Sometimes that’s more difficult than playing a lot of notes. Don’t think of yourself, become one with the music, and you’ll have more to contribute. Think of dynamics. That shows maturity and professionalism.”