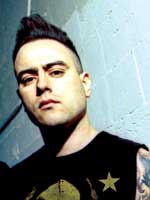 When drummer Fred Hell was shot four times during a home invasion robbery, he was left with a bullet lodged in his skull. A member of LA-based psychobilly trio Tiger Army, Fred faced a long recovery and the possibility he might never play drums again. “I lost all feeling in my left arm,” the drummer says. “I could barely use my hand, and I couldn’t hold sticks or anything.”

Beyond his physical limitations, Fred discovered he’d lost his sense of rhythm. “When I heard a song,” he says, “I couldn’t keep a beat. It was very scary.” Fred eventually retrained his left arm to do everything. In fact, he relearned the drums as if he’d never played before. “My sense of rhythm returned,” Fred says, “and when my left hand started coming back, I knew I’d be able to play again no matter what.”

Six months after the March 2003 shooting, Fred joined Tiger Army on tour. However, when the group entered the studio to record its third album, III: Ghost Tigers Rise, it became apparent the drummer wasn’t sufficiently rehabilitated. “We were doing twelve-hour days, but I was barely able to play for three hours,” the drummer admits. “My performance just wasn’t up to standard for the record.”

At that point, the band asked their friend, drummer and tech Mike Fasano, to fill in. While Fred couldn’t record the tracks for the record, his daily presence in the studio ensured his imprint was captured on the tracks. “Fred came in with a great attitude,” Fasano says. “He showed me stickings and helped me mentally with beats and parts. This would have been a challenging record even for a true session guy, because this music is all about imperfections and movement. It was one of the best and most rewarding experiences I’ve had playing on a record.” Fred adds, “Mike nailed everything and had great input. His positive energy also really contributed to my recovery.”

With Tiger Army back on tour, Fred feels he’s playing better than ever. “I’m definitely a stronger person because of all this,” he says. “I also feel lucky to be playing again. And since psychobilly music has a unique drumming style, I’m motivated to show what that kind of drumming is all about. I want to redefine it and bring it to a new level.”