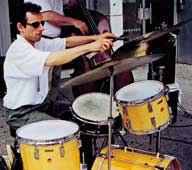 Sometimes the truth about drums will come to Drori Mondlak at night. He’ll stay up late, long after the gig, changing heads and tuning. Sometimes it will come to him during a jog in the forest, away from inner-city New York. Knowing a few truths lends urgency to his work, urgency you hear plainly on jazz guitarist Cary DeNigris’s album Between The Lines.

Says Mondlak, “Engineers don’t recognize the importance of the cymbals to music. The true sound of cymbals has to ring out. For Cary’s album, we used overheads way up in the air, a snare mic’, a bass drum mic’, and that’s it – no tom mic’s at all.”

While Mondlak scrounges for old cymbals like the rest of us – K Zildjians, older Sabian HHs, and Paiste 602s – he is equally adamant that his drums growl in low frequencies. “Many jazz drummers talk about how the old Gretsch drums are so fantastic,” he says. “Then they tighten them to death and choke them. Sometimes their bass drum is higher than their toms!”

Born of a Polish father and English mother in Mexico City, Mondlak recalls an insight offered by Lennie Tristano the day before the famous pianist passed away. “Lennie said to me, ‘With a name like that, two things are going to happen to you. Either nobody’s going to know you, or everybody’s going to know you. There’s no in-between!'”