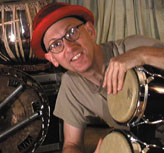 Drummer/percussionist Danny Frankel lives in a world of sounds. His latest release, The Vibration Of Sound (Transparency), is a collage of organic percussion sounds. As he explains it, “I hike every morning and listen to things like hawks and woodpeckers. They are natural percussion.”

The CD is a collection of moods generated by percussion and other instruments layered on top of tape loops and drones, which were inspired by his walks. “I had the idea of making percussion groove strongly, like a drumkit groove,” Frankel says. “Tabla People” features drones and voices moving in and out of the various drums and bells. “Message From Another Planet” features an ethereal steel guitar and a slowly unfolding clarinet. Frankel layers various sounds on top, especially bongos. “Bongos are my favorite thing,” he says. “I remember hearing them in ’60s pop music and being intrigued by the sound of the high bongo. I often use bongos instead of a high tom when I gig.”

Perhaps the album’s most intriguing track is “The Birdcage.” This is a “duet” between Danny and eleven Zebra finches. “I keep finches,” he says. “I started with three, then had eleven, then twenty-two. They’re psychedelic, and they have their own rhythms. One has a fast boogaloo beat, another an odd-time jazz beat.” The birds’ singing creates their own natural loops over which Frankel layered bongos, doumbek, djembe, conga, and metals. The interaction of the birds with percussion is startling and brings out the organic quality that Danny strives for.

Frankel has studied tabla, where he says he learned to “flirt with time.” He also studied with jazz drumming icon Paul Motian. “He had great ideas and stressed being relaxed and open to the spirit,” Danny says, “playing a piece differently every time.” Frankel’s busy schedule has found him working with such diverse artists as Laurie Anderson, Lou Reed, and Fiona Apple. “I’m open to anything,” he asserts.