When LA-based alternative rockers Portable released their 1999 debut, Secret Life, their decidedly retro sound was very similar to Britain’s arty post-punks Gang Of Four; a late ’70s/early ’80s influence echoed in the band’s visual image of matching dark suits and skinny ties. Three years later, what fans may perceive as a dramatic leap in style from Secret Life to its successor, Only If You Look Up, is simply a creative direction change that drummer Brian Levy chalks up to the natural growth process of his band.

“On our new record,” Levy explains, “we really wanted to see how far we could take our creativity and our imagination. With our first record, we had several years to write, try out, and record songs. There was less time to prepare the material for Only If You Look Up, but we still wanted to explore some new areas.”

Levy metaphorically compares Only If You Look Up–an engaging and ambitiously diverse collection of rock styles–to “walking through a really big house, where each room you enter has its own thing going on. Secret Life,” he clarifies, “was more like being in one room.” Portable also underwent a lineup change between records. “We have a new bass player now,” Brian says. “That had a profound effect on the sound and attitude of the band. Overall, I’m just really proud of this record.”

Torry Castellano: The Grip Of Death

Kit Of The Month: A Do-It-Yourself Adventure 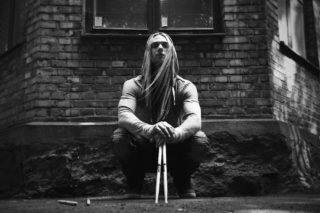 On The Beat with Jonas Ekdahl of Evergrey: Talks Influences and Approach

Brian Kantor of the Fruit Bats on Absolute Loser