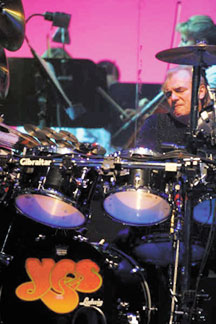 “Chris Squire, Jon Anderson, Steve Howe, and I wrote all of the material in the studio,” explains drummer Alan White of Yes about their recent album, Magnification. With a rare keyboardist-free Yes lineup, the band decided to utilize a symphony orchestra as an integral part of its compositions.

According to White, “We were in Santa Barbara for a couple of months making the album. Then our arranger, Emmy Award-winning composer Larry Group, would come into the studio every week and summarize what we’d done. He’d do orchestral arrangements on keyboards and bring them back the following week. We’d either sanction them or ask for revisions.” Once Yes had okayed his backing tracks, Group scored the compositions using the San Diego Symphony Orchestra.

Yes was very conscious to leave space for the orchestral arrangements. As far as White’s specific contributions, “Most of the parts I wrote were on keyboards. So we started that way, then I played the drums, and then later I redid the keyboards for the final mix.” “In The Presence Of” particularly shows White’s ability as a composer. In fact, it’s a little-known fact that his keyboard contributions have been a mainstay of Yes’s music ever since he joined the group in the early ’70s.

As Group was scoring the album, some bandmembers suggested he take his cue from composers like Sibelius or Ravel. “But I wanted more extreme types of arrangements,” White chuckles. “I kept suggesting Stravinsky and Wagner.” Alan’s long been fond of symphonic music. “When you play forty shows in a row of progressive rock, you tend to want to listen to something completely different.”