The recording of our second album, Velocity (Toucan Cove/Universal), started with a series of pre-production rehearsals attended by the band and producers Stan Lynch (Tom Petty and the Heartbreakers, Bob Dylan, Rock & Roll Hall of Famer, and bad cop) and Billy Chapin (Backstreet Boys, Edwin McCain, and good cop). We played down the songs that were in the running for the album and got a general feel for how we would approach the sound and direction.

The Villains as a band is a very diverse group of guys with a wide range of musical interest, consequently on our first record, Just Another Saturday Night, we self-produced and just let it fly. We all loved the record, but we realized for the followup we needed to make our sound into a unified statement that really defined us as a band. Stan intuitively knew how to help us streamline our sound into a tasty dish without losing any of our rock, country, or blues flavors. We set out the arrangements and distilled our parts down to the essentials to leave space for mix and magic in the studio, and we were ready to record.

We cut the drum tracks and most of the album at the famous Studio B at the Sound Emporium in Nashville, with audio engineer Gordon Hammond at the controls of a ProTools HD rig fronted by a (dinosaur) Trident series 80 console and some awesome vintage mics and outboard gear. Gordon’s mic placement and compressor settings are the unsung heroes of the session.

My trusty go-to studio kit of mid-’80s Yamaha Recording Customs sounded awesome on everything. I tuned as usual my 22″ kick, 12″ rack, and 16″ floor tom. With the Villains, I like to keep it simple and straightforward and set up a standard four-piece. The four-piece helps remind me to lay back and stick in the pocket, really let the songs develop.

For snare drums, I brought several of my favorites and ended up using the same two for almost the entire record. One is an ’80s Ludwig 5×14 with a steel shell that always seems to provide the power necessary for rocking. The other is a strange old drum made by Olympic, an old budget line by Premier. This shell was found literally in a pile of trash on a friend’s street with no heads or rims and only remnants of hardware. I took it home and rehabbed it back to life with spare parts and well-wishing. Somehow this ultra-thin shell with second-hand parts, given the right head combination, sounds awesome when it’s miked up. Anywhere on the record you hear a woody, beefy tone with a mellow high end, it’s the drum we now affectionately call The Road Kill. With the exception of fine-tuning the top head on the snare drums on a song-by-song basis, there was not much drama involved in getting a very upfront and lively drum sound.

Playing drums for a drummer’s drummer like Stan can be intimidating, but I have thousands of hours in the studio in all types of situations, and I know how to check my ego at the door and play for the good of the song. Stan is the same way, and he respects that attitude. I’m generally a conservative player in the studio, and with Stan’s feedback I became even more so. Since Stan was a drummer that suffered the heavy hand of many big-name producers, he would come over the talk-back mic and say stuff like, “Look, I feel your pain, I know why you’re doing what you’re doing. But try less of this and more of that.”

Subtracting and subtracting is tough on you mentally. “Is it getting too basic? Am I dumbing down”? There is a payoff: When it’s time to shine and rip a big fill, it sticks out like an atom-bomb blast. “Okay, this is the spot for something big, something famous.” And you know exactly what needs to be done—just execute. (Getting my vocal tracks was much, much more stressful, but that’s a different story altogether.) We worked tirelessly, doing twelve-hour days for a week and a half, to get the basic tracks on twelve songs and feel like they shine. I have no regrets or apologies for these songs or performances, I think they turned out great. Please check out Velocity anywhere you listen to music!

A quick bio of me: On the path, I’ve enjoyed touring and/or recording with so many great cats, including my bandmates in the Villains. We’re currently touring in support of Velocity. I’ve recorded and toured with Nashville/Moraine Records artist Keni Thomas for a couple of educational years. I tracked songs for hip-hop legends TLC, Cee-Lo Green, and Dallas Austin, and was the drummer in Dallas’s band for a while. I recorded and toured with Universal/Label X artist Peter Searcy from Louisville, Nashville rising star Shevy Smith, stellar singer-songwriter Kevin Lawson, Goth icon Jarboe of the Swans, avant-garde jazz-improv group BongoWrench, and many more. I’ve done TV and radio spots for TNT, Turner South, Cartoon Network, CNN, and NASCAR. I’m a contributing composer for several music catalogs, with over fifty published works. I have licensed music to numerous production companies and to various independent films. Sometimes I teach and lecture at the School of Rock in Atlanta. And look for my book on surviving difficult live gigs and gear failure, including hilarious stories, out next year. Keep rocking.

For more on Sean McNally and the Villains, visit their Facebook page. 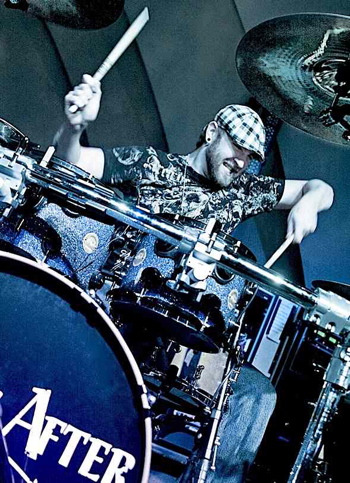 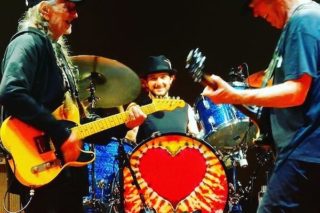 On the Beat with Anthony LoGerfo of Lukas Nelson and Promise of the Real: Talks Albums, Artists, and Upcoming Movie